President Uhuru Kenyatta seems to have adopted a new strategy to campaign for Azimio presidential candidate Raila Odinga, especially in his backyard of Mt Kenya.

Initially, the Head of State was set to hold joint rallies with Raila across the region but quickly shelved the plan with strategists saying it could have an opposite effect and benefit their competitor, Deputy President William Ruto.

This is because such rallies would give DP Ruto’s camp good campaign fodder that Uhuru’s support of the former Prime Minister is confirmation that the Azimio candidate is a ‘State project’.

The President has now deliberately kept away from the campaign trail but is expected to crisscross the country to show what he has done for Kenyans and not necessarily campaign for Raila.

According to pundits, Uhuru’s absence from active campaigning is to allow his allies from the Central region to frame the August 9 polls as a battle between Azimio’s DP candidate Martha Karua and DP Ruto’s running mate Rigathi Gachagua.

However, President Kenyatta is expected to hold low-key campaigns for his former foe as he commissions several projects in the Mt Kenya region where he is set to explain his choice to his people.

Do you think this new strategy by President Kenyatta will help Raila in the long run?

Trouble should be expected in Ruto’s government, if he forms it, should he keep his promise and appoint ANC leader Musalia Mudavadi Chief Minister, former Mandera Senator Billow Kerrow has warned.

Mudavadi has been promised the position for teaming up with Ruto, a post that would make him the third in command in the Kenya Kwanza hierarchy, after Ruto and his running mate Rigathi Gachagua. 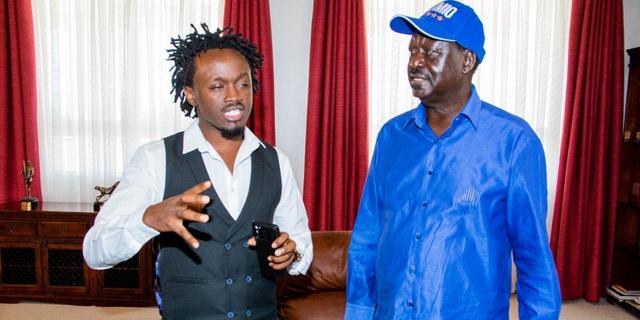 The ODM leader had offered the singer a job opportunity in his government if Azimio la Umoja secures victory in the August 9 General Election.

Win For Raila As A Former Presidential Candidate Backs His Bid

The former prime minister Raila Odinga of Azimio la Umoja one Kenya alliance is leading the largest coalition of Parties ahead of the upcoming general election.

With the latest opinion polls indicating that he could win the presidency, Raila has intensified his campaigns across the country in a bid to convince the minds and hearts of the undecided Voters and even woo some who have already made their decisions.