It’s the beginning of the new week and the country is still mourning the sudden death of the third President Mwai Kibaki. While his body has already arrived at the parliament buildings in preparations for three-day viewing by the public, preparations are in top gear at his Mweiga home in Nyeri ahead of Saturday’s state burial.

But even as the country continues pouring their tributes to the fallen former head of state, ODM party boss Raila Odinga is miles away to the USA together with a section of his brigade.

Raila who arrived in the US on Sunday morning was accompanied by among many other leaders, Narc Kenya Party Leader Martha Karua. It is, however, Karua’s presence that has set some tongues wagging.

Until the beginning of the year, Martha Karua was largely considered a peripheral figure in the State House power fight. With Karua being poised as one of those being prodded to be the country’s next deputy president, her presence in the US together with Kibaki has left many asking whether the Azimio camp is sending an indirect message on who Raila’s deputy is likely to be

Do you think her decision to accompany Raila to the USA sent an indirect message that she is the one fit for the big job to deputize Raila ahead of August 2022? 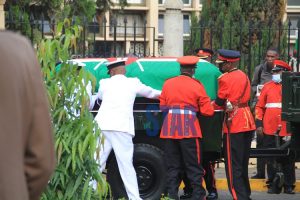 The body of former President Mwai Kibaki on Monday arrived at Parliament buildings a few minutes before 7:30 am.

This followed a Solemn Procession that began from Lee Funeral Home and took to  Valley Road and Kenyatta Avenue through to Parliament Road. A Military Guard of Honour was mounted along Parliament Road for the entry procession into Parliament

Unfinished Business as Raila Set to Cut Short His US Tour Raila, who is accompanied by a number of Azimio leaders, explained his vision for the country if elected on August 9 as he promised a number of goodies for Kenyans in the diaspora. 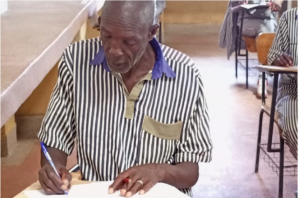 Grapton Olutwait, managed 10 points in the results released by Education CS George Magoha on Saturday afternoon. Olutwait was handed a life sentence six years ago for a sexual-related offense