It is a ruling that will more likely set new political directions in the country, determining whether “reggae” will resume after the ‘half time’ break or be sent to its final resting place.

The verdict will also shake up the country’s political landscape and governance system since this is also likely to sway the outcome of the forthcoming General Elections.

Since the two leading protagonists in the August presidential election, Dr. William Ruto and Mr. Raila Odinga, hold opposing positions on the BBI Bill, it means the Supreme Court’s judgment will be a victory or a loss to one of them.

In any case, BBI is brought back, it will also more likely act in favour of Ruto’s camp since the matrix of power-sharing between Ruto, Mudavadi and Wetangula will be half solved, the same case to Azimio camp which is taring at a likely Kalonzo exit.

The former vice has demanded that he will only play to Azimio tunes should the camp hand him the Deputy President post. BBI will mean more executive posts and Kalonzo can get something in return. However, this largely depends on the huge ruling today at the Supreme Court.

Do you think the BBI reggae will be revived or sent to its eternal resting place as earlier ruled by the High Court and Court of Appeal? 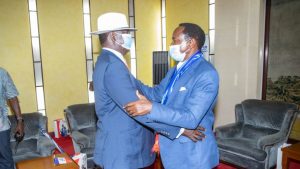 Details have now emerged on how the Azimio La Umoja camp and OKA alliance might have fooled Kenyans at the KICC during the agreement signing event presided over by President Uhuru Kenyatta.

It is now emerging that there is no deal between the two camps to date, and Kalonzo even signed a ‘blank’ MOU with the other Azimio parties to fool Kenyans that there was an agreement. Yesterday a cop went viral after he was caught on video manhandling a motorist and entering his vehicle through the passenger’s door.

In a clip captured by CitizenTVKe journalists, the rogue officer was seen fighting the driver before he sat inside the car and drove it to central police station. A key confidante of Raila Odinga claims that the former Prime Minister together with his associates were offered half of the senior government positions if they would succeed to topple Uhuru Kenyatta from power.

Junet Mohamed who is a close ally of ODM leader, also the national coordinator for the Azimio told the nation that he was in the team that was discussing the alleged proposal by DP Ruto to overthrow Uhuru’s government.