Deputy President William Ruto’s allies are plotting a takeover of the Jubilee Party in a bid to outwit ‘internal saboteurs’ frustrating his 2022 presidential bid.

Yesterday, his allies called for a grand house cleaning of the party’s leadership and elections to fill the positions held on an interim basis.

In a no-holds-barred post on Facebook yesterday, Gatundu South MP Moses Kuria hit out at the current party leadership, which he accused of stifling internal democracy by gagging members’ freedom of expression.

“Key national agendas such as the Big Four are very potent warheads, with the potential of transforming Kenya forever,” he said on Facebook. “But even the most lethal warhead requires a strong missile to deliver it. In the case of the Big Four, a strong Jubilee Party is that missile.”

In an indirect reference to Tuju and Murathe, the vocal lawmaker and President’s MP urged the party to pave the way for active politicians to assume its leadership mantle through free, fair and transparent elections.

“Yet we are the only political party with no space for politicians. John Mbadi (ODM), Professor Kivutha Kibwana (Wiper), Boni Khalwale (Ford Kenya) and Chris Wamalwa (Ford Kenya) are party chairmen and active politicians,” Kuria said, mixing up facts.

“Time has come for Jubilee Party to open up space for political participation. Party elections are long overdue,” he concluded.

Kuria’s statement brings to the fore the underlying suspicion in the ruling party that is obsessed with internal succession and the 2022 elections following the March 9 handshake between Nasa leader Raila Odinga and President Uhuru Kenyatta. 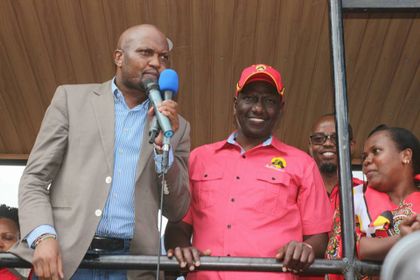 Yesterday, Kericho senator Aaron Cheruiyot, another ally of the DP, insisted that the Jubilee Party polls were long overdue.

According to The Star, He said that the national office needs fresh blood, including a crop of young people, to steer the party to even greater heights.

“The Jubilee Party should hold elections as soon as possible. We owe it to our party members,” Cheruiyot said.

Jubilee insiders, however, immediately read a sinister motive in the calls they say target secretary general Raphael Tuju and outspoken vice chairman David Murathe over claims that they are ‘sabotaging’ the DP’s plan to succeed President Kenyatta.

The Jubilee Party never held elections to fill key positions after the merger of 11 affiliates less than a year before the 2017 election.

The officials were handpicked by Uhuru and Ruto to hold office on an interim basis following the merger of political parties in September 2016.

Grassroots elections, which were to be held within 90 days after last year’s general election, have never taken place.