Law Society of Kenya President Nelson Havi has had enough of the Kenyan media, this was evident after he engaged in a rough twitter exchange with the star newspaper.

On Monday, Havi took to twitter warning the media station against using his photo while at Kiganjo. Kiganjo was the literal meaning of him while he was an advocate and not a senior citizen like he is at the moment.

In his tweet, one could tell Havi was not having it. Many would agree that his red tie has been constant, he, however, felt his current status doesn’t allow him to be portrayed badly.

Known for his exquisite taste in fashion, Nelson surely did not come to play. He expressed his disappointment in the local media station, highlighting how the star newspaper has only been using one photo of him.

Havi tweeted with a caption, “Please don’t use photographs of me when I was still at Kiganjo Police Training College. I am now a civilian with a good ‘public opinion’.”

Please don’t use photographs of me when I was still at Kiganjo Police Training College. I am now a civilian with a good “public opinion.” https://t.co/jvI5hAE7fE

The Kenyan star newspaper was thrown under the bus after they highlighted a plea that the law society of Kenya had made with regards to the night curfew. Havi’s main concern was of them placing his photo looking grainy and not as polished as he is now. 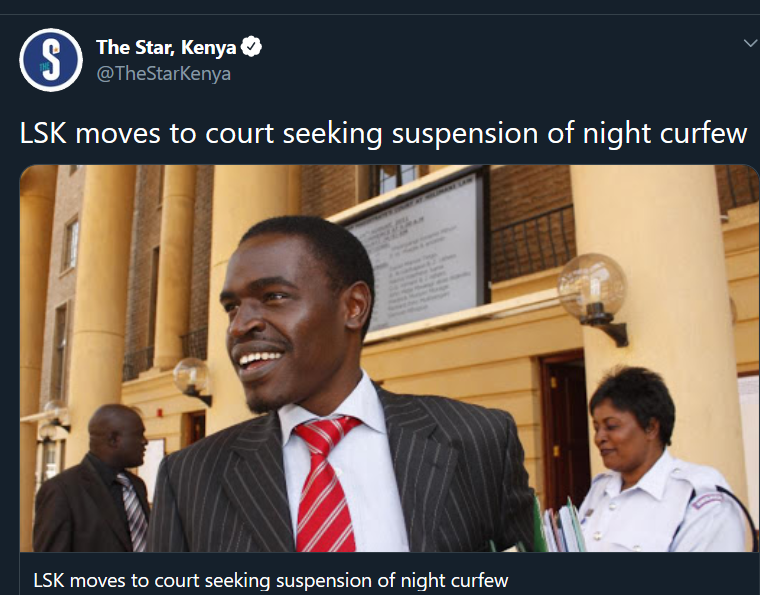 Being the president of a highly embraced association, Nelson and his collegues moved to court seeking to suspend the night curfew imposed by the state. They argued that the curfew is unconstitutional and the excessive use of force on Kenyans to enforce the curfew is illegal.

Havi’s fans joined in and one @sethmasai stood out with his comment saying, “Thank you sir ask them to update their gallery. The @TheStarKenya is literally backwards on everything.”

In late February, Havi won the hotly contested Law Society of Kenya election with a landslide against three other candidates who contested for the presidency.