Uhuru arrived at the Parliament Buildings as per the schedule given by the government.

He was received by Deputy President William Ruto among other dignitaries that were present at the venue. 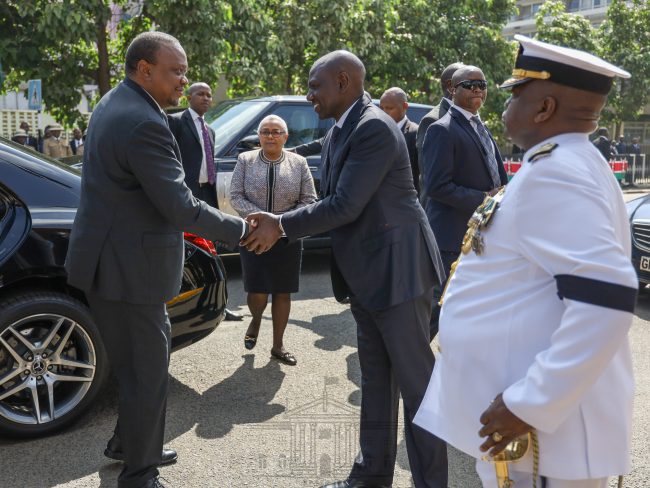 Before proceeding into the structure, President Uhuru waited for the National Anthem to be played, in order to start the ceremony.

Accompanied by first lady Magaret Kenyatta, the pair made their way into the National Assembly room where Moi’s body lay.

Surrounded by military personnel, Uhuru and Margaret had a fool show of the remains of the ‘Professor of Politics’.

The procedure was short as the first family left the grounds immediately.

Prior to the ceremony, the Head of State addressed the country at State House in regards to the death of the ex-president after jetting back from the United States.

Uhuru remarked that the country had lost an icon who had dedicated his life to serving the people.

“It’s with a heavy heart and a profound sense of personal loss that today I make this tribute in honour of the life of president Daniel Toroitich Arap Moi who rested in the early hours of Tue 4 Feb. 2020,” uttered the President.

He further noted that Moi helped Kenyans without discrimination and strived to ensure the country was going forward.

“Today we celebrate the life of a patriot who wherever in Kenya he found himself he would come fierce and raise the hopes of everyone who heard him. No part of Kenya was strange to him and nor were her citizens,” expressed the Head Of State.

“Today we celebrate the life of a patriot who wherever in Kenya he found himself he would come fierce and raise the hopes of everyone who heard him. No part of Kenya was strange to him and nor were her citizens…” – President Uhuru Kenyatta#RIPPresidentMoi pic.twitter.com/41wdPYIne8

The Jubilee party leader pronounced that the once KANU party head’s legacy would remain engraved in the hearts of Kenyans.

“President Moi was a mortal man whose works and legacy will remain immortal,” President Uhuru pointed out.

As part of the State funeral plan, Moi’s body will remain at the building for the next two days before being moved to Nyayo National stadium.

The ‘Nyayo’ man is set to be laid to rest at his Kabarak home in Nakuru in accordance with his last wish.

The politician will be buried to his late wife Lena Moi.