Otile Brown has hit at socialite Vera Sidika, his short time lovebird, with shocking information about their past relationship.

In his words, Otile has revealed that Vera was a selfish and dishonest person whose motives for their relationship were never known.

The singer has revealed information regarding the alleged abortion which Vera Sidika allegedly underwent to get rid of his (Otile Brown) child.

Posting on his insta stories, Otile claimed that Vera aborted because she thought he wasn’t lightskin enough.

“Some people are sick. Mtu Yuko so obsessed kuzaa mtoto mcute forgetting that chalii na dame wanaweza kuwa lightskin and mzae mtoto mweusi. Have seen it with my own eye. Yangu ilitolewa coz she doubted I’m light skin enough for the baby.” read the post. 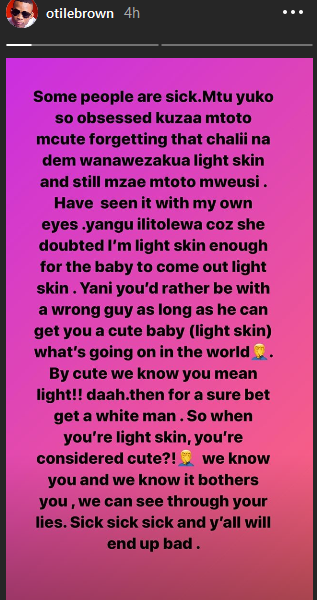 The two dated for six months and what followed later was a nasty break up that left them airing their dirty linen in public.

This is not the first time the musician has accused the socialite of aborting his child and he had in the past released a song explaining why he walked out of the relationship.

A few months later, Vera Sidika cleared her name sighting that she thought Otile was the one but he thought he would not make a good father at 27 years old.

According to Vera, she really wanted to have a child while they two were still dating so she had no reason to abort. She accepted that she used birth control pills because she was afraid of committing to someone who would only waste her time.