The Gunners’ supporters have been calling for Emery’s ouster for weeks now due to a poor run that has seen the team go for seven matches in all competitions without a win and the Spanish could now be run out of luck.

On Thursday, a section of Arsenal fans decided to snub the match altogether in a bid to force the club hierarchy to dismiss the tactician. Many empty seats could be seen at the 60,000-seater capacity with many supporters opting to stay away due to the poor run.

Emery’s side went on to lose the game despite taking a first-half lead through Pierre-Emerick Aubameyang. The Gabonese forward scored just before the break but Japanese midfielder, Daichi Kamada scored a second-half brace to ensure that the Bundesliga side picked three points away from home.

Despite the chants demanding that he leaves the club and the fans snubbing the match, the former PSG and Sevilla coach remained upbeat in his post-match interview noting that his side showed improvement in performance.

“I think we improved. In the first half, we had control of the game and we were winning 1-0 but we created chances to score a second goal. The first five or 10 minutes or so of the second half was positive, how we were playing,” he said. 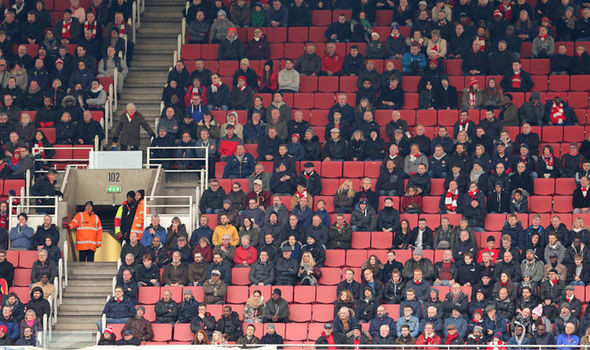 According to him, his team played badly for only 15 minutes and ended up conceding two goals.

“We lost control in 15 minutes of the second half and they scored two goals and then we couldn’t change the result. The last 20 minutes we tried to come back but we didn’t create in that moment a big opportunity to score,” he added.