The new mother and girlfriend to Musician Diamond Platinumz shared photos of her award on her social media pages.

Tanasha couldn’t hide her excitement and sent the beautiful award and certificate on her Instagram stories. 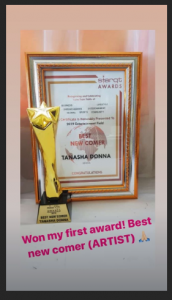 Donna made her debut in the music scene just 5 months ago. She was part of a new crop of talent that was associated with Wasafi Record and her Boyfriend Diamond which was a huge plus.

Radio currently boasts 1.5 million views on youtube. After the launch, her song was accepted by her a huge number of fans and she couldn’t hide her joy:

“.. God is good. I’m blessed. Thank you so much for this. This means so much to me. I didn’t expect this at all. I used to dream of such days and now it’s become a reality. Thank you so much. I can’t believe it. Dream come true. Thank you all,” Donna said on Instagram.

After her first single, Donna has had a streak of successes when it comes to her music. She branded herself the female Tarzan in the song ‘Nah Easy’ which went viral, garnering more than 600K views since its release. She plans on releasing her EP soon dubbed “Donna Tella”