Don’t stare, don’t stare, don’t stare… Is she catching me staring? Yes, she is catching you staring. But like so many aspects of how women are looked at on a scale that ranges from ignored to admired to creepily eyeballed, it’s independent of how the woman herself might actually feel about her stiff public nips. 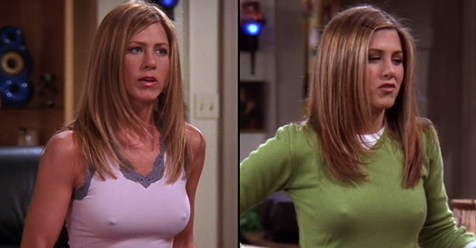 We’ve talked at length here about our culture’s helpless obsession with boobs, but less discussed is our obsession with nipples. The boob may be the squishy canvas that props up our fantasies, but the nipple is the brushstroke that paints the story.

It’s the nipple that holds the tightly packed nerve endings that conjure the most eroticized sensations; also you can’t get to the milk (literal or metaphorical) without them. This may be why porn’s nipple game is varied and complex: From the long to the puffy, from the big to the small, there’s a nipple for everyone.

We sometimes call women’s nipples headlights, and in a sense, they are. But more like a light show. They call some serious visual attention to the owner, and they also “light up” the same erogenous response that happens in the genitals, which is why some women can get off entirely from nipple stimulation alone. And they light up some people’s brains just to look at them.