The husband of slain activist Caroline Mwatha has rubbished police claims that his wife died from a botched abortion.

Joshua Ochieng, who jetted back into Kenya from Dubai last Sunday (February 10 on Wednesday said that he has never suspected his wife of straying.

According to him, his wife passionately abhorred abortion, and there was no way she could undergo the exercise.

“Why would she wait for five months to abort a baby? I really doubt the police report [claiming that she had an abortion]. I have known my wife for over a decade now – and I think I am certain of her character; I know what she can do, and what she can’t do,” Mr Ochieng told said.

“And, even if she was pregnant, it could as well be mine. Why? Because the last time I was in Kenya was in late August last year, and we got intimate. If you do your calculation, then the 5-plus months pregnancy that police are alleging could as well be mine. But, what I am sure is she wasn’t pregnant,” said the distressed middle-aged man.

Mr Ochieng says he spoke to his wife on the last day she was seen in Dandora.

“I spoke to her on Wednesday, February 6, the day he went missing. And, from our conversations, all was well – she wasn’t in any distress, whatsoever,” he said.

“I have never suspected my wife of cheating, not in our earlier stages of marriage; and not even recently,” said the logistician, who works with Dubai-based firm Al Shaya.

According to Caroline Mwatha’s father, Stanlaus Mbai, his daughter didn’t disclose to him that she was expectant as police allege. 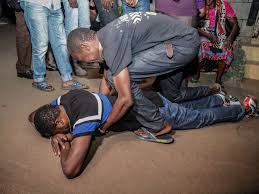 “Most likely, police have fabricated the narrative. A 5-month pregnancy isn’t something you can hide. And, my daughter was very open with me. Had she been pregnant, she would have told me. Which kind of an abortion is conducted by deeply cutting the thighs, pricking the abdomen and stabbing the neck?” posed Mr Mbai.

Caroline Mwatha and Joshua Ochieng tied the knot in 2005, and are blessed with two children.