The footballing world did a double-take when Marouane Fellaini decided to shave off his afro last month.

The Manchester United player was always one of the most recognisable players in the Premier League, breaking down midfields and bagging goals with his huge head of hair.

Nevertheless, when he took to the field against Arsenal on Wednesday night, Fellaini was sporting a far subtler haircut.

So, it was certainly amusing when Fellaini took the decision to pull the hair of Matteo Guendouzi, who wears an afro haircut of his own.

The amount of times Fellaini has been hampered by opposition players pulling at his locks, it was bizarre to see the tables turn at Old Trafford.

Ultimately, the petty incident had no real bearing on the game with a free-kick being awarded and Fellaini escaping a yellow card.

That might not be the end of the story, though, and Fellaini should be more aware than most.

The United midfielder has been involved in a similar incident before when, back in 2016, Leicester defender Robert Huth decided to pull the 31-year-old by his afro. Ian Wright received a three-match ban in 1996 for a clash with Sheffield Wednesday’s Regi Blinker, only for Huth to be slapped with the same sanctions 20 years later.

And while Fellaini awaits any potential punishment from the FA, none other than Huth has taken to Twitter in reaction to the incident.

Instead of calling for Fellaini to be handed the exact same repercussions as himself, he saw a funnier side to the episode and couldn’t help cracking a joke.

Fellaini wanted Guendouzis hair so much he tried to pull it out pic.twitter.com/IS9it991op

We’re not sure Fellaini decided to pull Guendouzi’s hair because of how well it worked against him, but it’s certainly amusing to think.

As for the suggestions that Guendouzi should have played on, that’s easier said than done when all six foot and three inches of Fellaini has you by the reins.

Nevertheless, reminders of the Huth-Fellaini incident will certainly raise questions about the latest bout of hair-pulling in the Premier League. 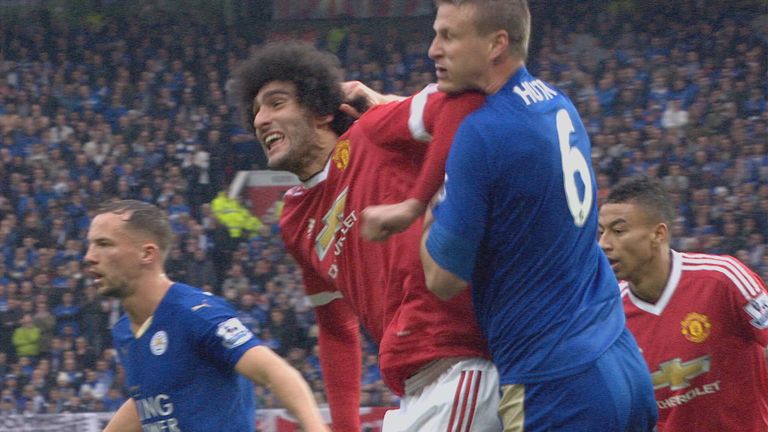 It was a strong pull from Fellaini, so there’s every reason to suggest he could face a suspension in the coming days.

Arsenal fans believe are backing intervention and questions will be raised about the Premier League’s consistency if Fellaini escapes punishment.

And if that isn’t the case, perhaps Guendouzi should consider reaching for the clippers as well.