A midwife has been suspended after her selfie in a labour ward showing a naked pregnant woman in the background surfaced online.

The selfie of a midwife in Malawi Patricia Malichi which has an unidentified pregnant woman lying on a hospital bed at Ndirande Health Center in Blantyre city has sparked outrage, causing the Ministry of Health to suspend her midwifery duties.

Malawians on social media have since called on authorities to fire the nurse saying her actions are shameful and could discourage pregnant women from going to hospital. 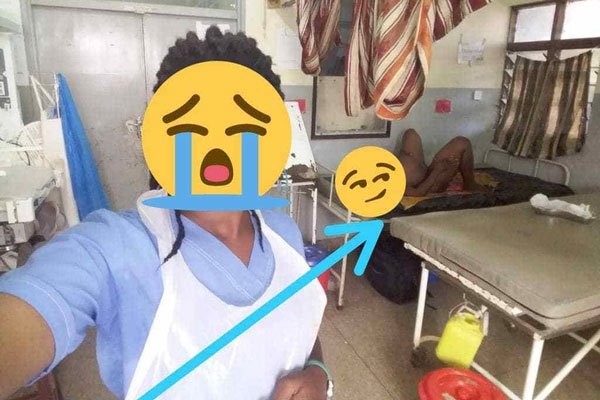 The health ministry is also investigating whether the photo was leaked or posted by the midwife.

“We don’t want to judge her, and that’s why we’re working with the council for a fair trial and a clear investigation of the matter, and for them to come up with a recommendation,” Malango told CNN.

“We want to find out how that picture ended up in the public domain.”

He, however, dismissed local media reports that nurses have been banned from bringing mobile devices into clinics in the country following the incident.

However Mulichi says the picture has been circulated in social media platforms by her former boyfriend who had confiscated her phone as a matter of jealousy.