Have you watched Squid Game on Netflix yet?

If not, here is some advice-don’t, and if you do, prepare for some serious trauma.

It is hard to comprehend how messed up in the head the writers of the show must be, and even worse must be whoever approved its production!

The theme of the irreverent thriller is bloody murder of characters, who only have three options in life: Die while playing childish games, go back home and wallow in debt and poverty; or, win billions to offset their debts and stroll off into the sunset.

Many things have changed in the world in the 21st century, among them, the normalization of extreme violence in society.

While we are all stan for creativity, we must avoid crossing the line in the name of producing blockbusters.

We may not pick up guns and start popping one another off after watching just one violent show, but pro-brutality subconscious messages are embedded in our brains over time.

If caution is not taken, 20 years from now, the world might turn into a real-life Gotham City, with no Batman to rescue us. 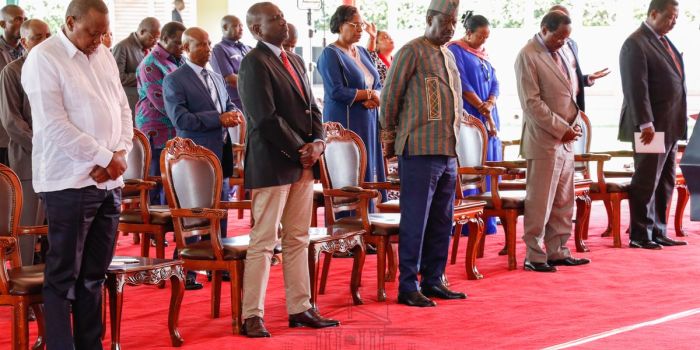 President Kenyatta’s open endorsement of ODM leader Raila Odinga to succeed him has set the stage for a two-horse race with DP William Ruto.

This even as the DP’s Tangatanga camp exuded confidence that they will trounce Raila at the ballot despite the backing of the President.

The opposition on Thursday hinted at a possible reunion that will see the former National Super Alliance principals team up as the country approaches the 2022 General Election.

Letting the cat out of the bag were One Kenya Alliance chiefs.

Wiper leader Kalonzo Musyoka said there are chances of a possible merger of all the opposition bigwigs.

ODM leader Raila Odinga has now been told that he doesn’t have the Mt Kenya region’s endorsement just yet, after a while of being seen as making good progress in his bid to woo the region.

Earlier in the week, he visited some parts of the region and was warmly welcomed, after which he met members of the Mt Kenya Foundation, who hinted at having settled on him as their 2022 man.