Tanga Tanga politicians are once again on President Uhuru Kenyatta’s throat as the wrangles at the ruling Jubilee party escalate.

The faction allied to Deputy President William Ruto has now resulted in using a myriad of damaging revelations with the latest being a scathing attack on Uhuru’s niece Nana Gecaga.

According to a Sunday Nation report, the DP Ruto camp is accusing Ms. Gecaga of “conflict of interest” in an exposè on how a company associated with her was awarded a multimillion-shilling tender to supply key campaign materials in the run-up to the 2017 elections.

Moreover, Bahati MP Kimani Ngunjiri has castigated the Head of State for constant humiliation of his deputy after he alleged the president was sending people to insult the DP and that he would be held responsible for any skirmishes which might erupt during his regime and the next election.

According to the vocal legislator, the International Criminal Court at The Hague, Netherlands, was watching Uhuru and he would be one of the people who will go to the court and never come back.

All this recent rhetoric is a move by the Tanga Tanga team to fight back the party’s Secretary General Raphael Tuju’s decision to make official the controversial changes at the National Management Committee.

As analysts point out, the once vibrant and youthful Jubilee Party is headed for a very messy divorce that will see long-held secrets laid bare to the public.

Even as the country continues to fight the deadly coronavirus that has infected 465 people already, the supremacy battle between these two leaders is set to jeopardize not only the government’s development agenda but also the borrowed unity brought about by the handshake between Uhuru and his former political nemesis Raila Odinga.

With the heavy investment on propaganda by bloggers from Ruto’s side to smear the government and make it look corrupt and out of touch with the plight of the people after the second in command was isolated, it will be interesting to witness what transpires next as more beans are set to be spilled by the two sides.

New disturbing details have emerged about the nature in which Tecra Muigai, Keroche Breweries heiress, met her death while in her boyfriend’s house.

Daily Nation disclosed that Muigai, who was living with her boyfriend, Omar Lali, at a private residence in Shella on Lamu Island, fell down a flight of stairs on Tuesday, April 28.

The recent spat between Senate Majority leader Kipchumba Murkomen and his National Assembly counterpart Aden Duale seems to have exposed the deep-rooted bad blood between the two Houses.

Last week, two members of the National Assembly were heard saying they are out to frustrate the Senate. They said that they are going to counter every move Senators make to prove to them that they are a ‘useless’ house. 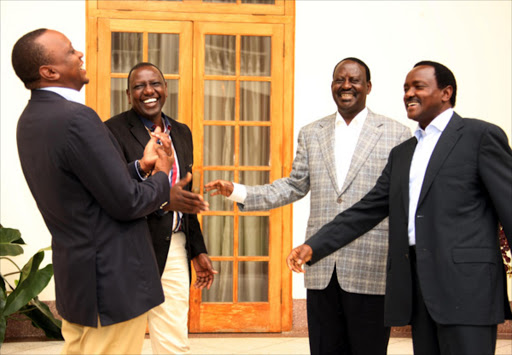 ODM leader Raila Odinga and his Wiper counterpart Kalonzo Musyoka will get a plum share of a proposed Sh785 million budget for retired state officers.

The two leaders have been allocated Sh200 million each in gratuity as former Prime Minister and former Vice President respectively.

The state has also granted the duo annual pensions of Sh25 million each, translating to about Sh2 million per month.

Tanzanian President John Pombe Magufuli on Sunday claimed that Coronavirus test kits used in Tanzania were dismissed as faulty because they had returned positive results on samples taken from goats and pawpaws. Do you think that Magufuli’s assertions are justified or is he resulting in playing politics after blundering to contain the virus early enough?