Suspects in the murder of Machakos Catholic Priest will wait for 21 days before taking a plea as prosecution concludes investigations.

The two claimed the prosecution had failed to present a letter of recommendation from the office of Director of Public Prosecution for charging the accused as required, which was not disputed by the prosecution. 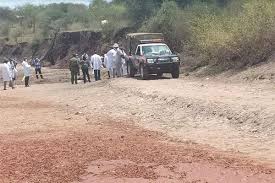 In her ruling, Justice Musyemi, directed the plea taking to be postponed for three weeks to give the prosecution time to conclude their investigation and to furnish the defense with necessary documents for the case.

Leah Mate, State Counsel, had requested the Judge to allow plea taking despite the shortcoming, citing the time spent by the suspect in remand, however, Justice Musyemi noted the case is premature for plea taking.

Justice Musyemi directed the accused to be released on a bond of Sh. 300, 000 each and a surety of a similar amount and be presented in court on December 16, 2019.

Muthini, Mwangangi, and Mutava are alleged to have taken part in the murder of Fr. Michael Maingi Kyengo on October 7, this year.

The 43-year-old priest disappeared from his parent’s Tala home in Matungulu, Machakos County on October 5 and his body recovered on October 16 from a shallow grave in a riverbed at Mbeere South, Embu County.

Muthini who was arrested in Makindu town on October 11 by officers from the Directorate of Criminal Investigation (DCI) while driving the slain priest’s car had led the police to the house where Kyengo is believed to have died.

The suspect had directed the officers to where the body was recovered where they confirmed that Kyengo was killed inside a rented house belonging to the suspect. Police recovered a knife from a pit latrine in the suspect’s home.