The presenter reported back to work on Wednesday morning after the station’s management yielded to mounting pressure from enraged fans who were threatening to switch to the station’s competitors in masses.

His sacking enraged Kameme fans who camped on the station’s social media, spewing anger at the management. A word from inside Mediamax revealed that the management was shocked by massive vows by fans to exit the station if Man Nyari was not brought back.

Man Nyari hosted Njanjo ya Muturire, an emotion re-union show that had massive following at the station. The show was assigned Wamucii Wa Kinyari after he was fired alongside hundreds of other employees in Mediamax Limited.

The presenter is now back and will continue with his show from Saturday and as usual, it will be aired simultaneously on Kameme Radio and TV. He has refuted claims he was heading to a rival station.

Here is the presenter’s statement on Facebook thanking his fans for standing with him and ensuring that he comes back to air after the sacking.

I want to take this opportunity to thank the Almighty God for hearing our cry… the voice of Wanjiku, the cry of the voiceless.
You remember Dorcas in the Bible? how she used to help the widows? when she died all the widows gathered cried to God to raise her.
Apostle Peter had to pray and God raised her. you have called me back to “life”.
The work we did was a living sacrifice before the throne of God.
Thank you Mediamax for giving me another chance to serve the voiceless and the down trodden. Giving hope to the hopeless.
May God help me to serve His people in this great calling with humility for His glory
God bless Kenya, God bless Mediamax, God bless Njanjo, God bless Man Nyari.

Here are some of the comments from Facebook and Twitter by his jubilant fans shortly after the re-hiring; 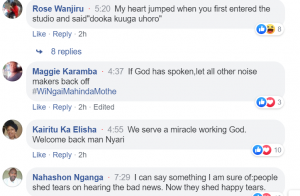 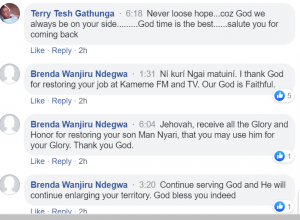 @kameme101 thanks for hearing our cry….that’s why you are kayu ka muingi …by reinstating Man Nyari programme

Never ever underestimate the power of social media noise.
Kameme FM Official have bowed to it and Man Nyari – original with Njanjo show will be back on air this Saturday.
His good work continues. 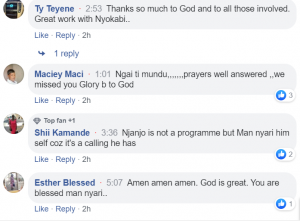 Ooh yeeees!!! Man Nyari is BACK WITH A BANG!!! @MwangiJmacs @kameme101 @KihenjoOfficial yaaaay!!!!!!

Man Nyari is baaaaaack! Glory be to God! Hallelujah

The power of social media brought back Man Nyari to Kameme Fm https://t.co/ztGAjqs8Hy