The Saints picked the heaviest defeat home in the history of the English Premier League as Brendan Rodgers men ran the riot against ten-man hot after Ryan Bertrand had been sent off.

Ayoze Perez and Jamie Vardy scored three each while Ben Chilwell, James Maddison, and Youri Tielemans scored a goal each to help the Foxes register a record-breaking away win the league.

In his post-match interview, Hasenhüttl who is reportedly on the brink took full blame for the defeat and apologized to club supporters for the defeat. He went on to thank fans for sticking with the team throughout the heart-wrenching experience.

“I must apologize for this performance. I take 100% responsibility for what happened. I want to say that I’m proud of the fans that were staying in the stadium until the end of the game because it was not easy to watch it for anybody who is a Southampton fan,” he said. 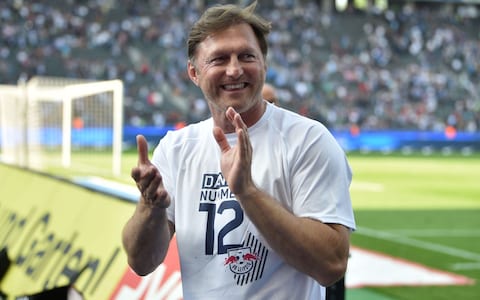 The tactician went on to blast his players for shambolic defending after the red card saying his players ‘gave up’.

“We have to apologize for what happened. After the red card, every attack was a goal. There was no defending at all. When you act like this, you can’t be surprised when you concede nine. You can call it if you want ‘gave up’, you can call it ‘helpless’, you can call it what you want. It was a disaster,” he added.