The two, in a letter copied to the ODM’s National Governing Council, said there was a complete disregard of the constitution of the party in the manner and style the disciplinary committee arrived at the decision to expel them.

ODM Edwin secretary General Sifuna dismissed the petition arguing that there wasn’t a mechanism to facilitate an appeal of the decision of the Party’s NEC to the National Governing Council (NGC). 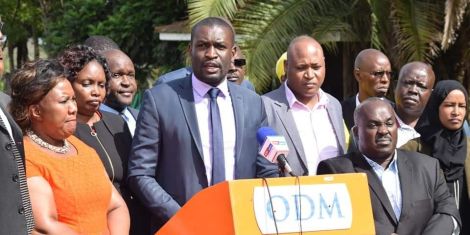 “The sections quoted in your letter on “appeals to the NGC” do not exist in the ODM party constitution,” read part of the statement.

KOT expressed their opinion on twitter with a number saying MPs Aisha Jumwa and Suleiman Dori seeking help from Kipchumba Murkomen a mockery of the highest order.

Hon Aisha Jumwa & Hon.Suleiman Dori seeking legal help from Kipchumba Murkomen of the “Law is Very Clear” is just a mockery of the highest order.

The associates of his firm together with the partners are great handlers of certain rift valley presidential aspirant pic.twitter.com/0arJzegZgp

Aisha Jumwa & Suleiman Dori have no respect for the ODM Party as their actions have continued to suggest.

Using Wakili Kipchumba Murkomen to Appeal is making a Mockery of the Party. Why didn’t they consider James Orengo Or a Lawyer with no known Political Leaning?! pic.twitter.com/Yky6vXtRl7

Someone should have shared with @kipmurkomen this document before he signed up to defend “Ex ODM members Dori and Aisha Jumwa”…..But how did one expect the blind to lead the blind? pic.twitter.com/z92RrxaaXy