Kenyans across all walks of life Thursday celebrated Mashujaa Day, a day set to honour heroes and heroines who liberated Kenya from colonial rule. Kenyans who have also made tremendous contributions to the nation’s well-being are celebrated.

The day that was the first public holiday in President William Ruto’s government, however, was met with harsh reality as leaders and Kenyans skipped the event held at Uhuru Gardens, Nairobi.

Former President Uhuru Kenyatta was out of the country for a retreat while ODM leader Raila Odinga was in India and other states for a week’s visit. Only Wiper leader Kalonzo Musyoka was present.

Leaders allied to the Azimio camp were a no-show at the event that saw many Kenyans skip, causing jitters on social media. Many Kenyans are of the opinion that the current government has not united supporters from all political divides and has a long way to go.

In other news, Kenyan lawyer Miguna Miguna landed in Kenya after almost five years in forced exile. The barrister who swore Raila Odinga in as the people’s President in 2018 was deported to Canada, where he holds citizenship.

Miguna jetted back after Ruto’s government furnished him with a new passport and yanked red alerts imposed on him by the Uhuru regime.

After landing at the JKIA on Thursday morning, Miguna thanked the Kenya Kwanza Alliance for bringing him back home and Kenyans for voting Ruto in. 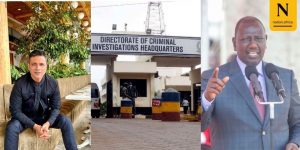 A total of 21 detectives who served under a recently disbanded unit of the Directorate of Criminal Investigations (DCI) have been summoned to the Internal Affairs Unit (IAU) headquarters in Nairobi.

The officers who had been attached to the Special Services Unit (SSU), whose ranks range from corporal to Inspector of Police, have been asked to report unarmed to the IAU headquarters at Kenya Commercial Bank (KCB) Towers in Upper Hill, Nairobi County today Friday, October 21, 2022.

President William Ruto said he will launch his flagship Hustler Fund credit and savings product on December 1, 2022, where credit products will be available to small businesses on digital platforms.

Under the plan, those seeking to benefit through the Sh50 billion kitty ought to have joined cooperative groups, which will act as their guarantors.

Bones Believed to be of Indian IT Experts Found

Bones, belts and clothes believed to be of the two missing Indian Information Technology (IT) experts and their driver have been found in the Aberdare Forest after a two-day search.

The foreigners are believed to have been abducted by Special Services Unit (SSU) officers on July 25.