Today marks the third day of the supreme court hearing of the Raila vs Ruto presidential petition and Kenyans are curious to know the decision that the 7 panel of judges led by Chief Justice Martha Koome will arrive at after the lawyers representing each party finish making their submissions.

Day 1 of the hearing was characterized by the lawyers from the Azimio side submitting their arguments in the presence of the judges, recounting and scrutinizing votes from 15 polling stations, and IEBC allowing the Azimio team access to their server; as ordered by the supreme court.

Day 2 kicked off with the Azimio team answering the question which had been raised by the panel of judges on the previous day in regard to their claims followed by lawyers representing president-elect Ruto’s team defending his win and IEBC lawyers got a chance to defend the commission.

Lawyers representing IEBC asked the court to strike out the case claiming that original form 34 As were pulled down and re-uploaded on the servers terming this as impossible and affirming that the system is secure.

IEBC also countered claims that chairman Wafula Chebukati is incompetent by stating that he should in fact be congratulated for conducting a free and fair election. They further told the court that nullifying the election would result in more frustrations in the country considering that the Azimio team is not willing to participate in any elections that will be conducted by Chebukati.

Kenyans and the rest of the world have all their eyes on the supreme court as they await the final decision which should be made by the Supreme court on 5th September. The possible outcomes, in this case, are that the court may annul the election forcing Kenyans to go back to the ballot, or rule that there were loopholes in the process but not enough evidence to overturn the results or uphold the elections which would allow the swearing in of the president-elect William Ruto.

What are your expectations in terms of the final decision by the supreme court which will be made on Monday? Azimio Presidential Candidate Raila Odinga’s team has fired back after the United States of America has cautioned its citizens against traveling to Kisumu ahead of Monday’s Supreme Court ruling as new details emerge. 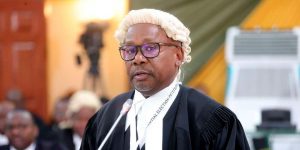 The electoral agency Thursday defended its declared results in the presidential election while accusing Azimio la Umoja One Kenya Coalition Party candidate Raila Odinga of using forged documents to trick the court into nullifying the exercise held on August 9. It has emerged that scrutiny of the presidential ballot boxes in polling stations ordered by the Supreme Court has unmasked serious anomalies. It is reported that the unearthed issues could end up putting the electoral agency in trouble with judges at the Supreme Court.