I hope you all had a great weekend and are ready to usher in a new week.

Preparations for the August elections continue to take shape with the ongoing IEBC clearance process that has over the weekend seen two of the top contestants for the presidential seat; former prime minister Raila Odinga and UDA party leader William Ruto receive a green light on their bid.

Ruto was cleared by the electoral board on Saturday alongside his running mate Rigathi Gachagua whereas the Azimio La Umoja One Kenya flag bearer Raila Odinga was cleared on Sunday making him the fifth presidential candidate to be cleared after Ruto, George Wajackoyah of roots party, Mr Walter Mong’are of Umoja Summit Party and Mr David Mwaura Waihiga of Agano party.

While giving his speech following the approval of his bid which will serve as his 5th attempt, the Azimio leader expressed his confidence in the electoral body to conduct a free and fair election. This milestone in his political journey will be followed by the launch of his manifesto at the Nyayo National Stadium on Monday.

Ruto on his end stated that his clearance by IEBC serves as a new hope to common mwananchi’s and people from humble backgrounds that they can succeed in the pursuit of their ambitions. He also hit back at political rivals who had predicted his failure and declared that he would not make it to the ballot.

While the approval of the bid of these two great rivals in the presidential elections has attracted mixed reactions. One that counts as a setback for the Azimio flag bearer is a comment from Thirdway Alliance party leader Ekuru Aukot who has vowed to challenge Raila’s clearance by IEBC alleging that he is a state project. Safina Party Leader Jimmy Wanjigi after a fall out with Raila Odinga’s Orange Democratic Movement Party over betrayal claims disclosed that after the swearing-in of Raila Odinga as the people’s president their next stop was to overthrow President Uhuru out of power.

Miguna Delivers Message to DP William Ruto, Warns Him Against Doing The Following 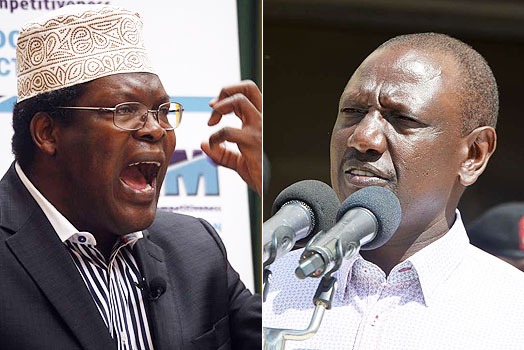