It is on a Thursday just two days before the weekend and the two leading presidential aspirants are leaving nothing to chance as far as wooing the vote-rich Mt Kenya and Western regions are concerned.

While a section of Deputy President William Ruto’s team transversed the Coastal region on Wednesday, Raila Odinga and another section of Ruto’s team pitched camps in Vihiga and Bungoma counties respectively.

It was, however, the reception that Raila received in Vihiga that left Kenyans wondering whether the two brothers, Moses Wetangula and Musalia Mudavadi, who were in Bungoma, are still the region’s kingpins.

While Raila’s rally was full to capacity, Musalia and Moses’ rallies seemed to be struggling with only a handful of supporters showing up to welcome sons of the soil into their backyards.

It was imminent from the crowd that attended the two different political rallies that Musalia and Wetangula could be struggling to outdo Raila’s dominance in Western Kenya.

Do you think the two Luhya kingpins will deliver Kenya Kwanza more than 70% presidential?

Kiunjuri to Mt Kenya: Vote Whoever you Want for Presidency; Elect Leaders Not Parties 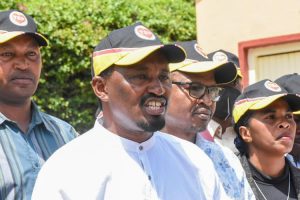 With about two months to the August 9, polls, The Service Party leader Mwangi Kiunjuri now wants the Mt Kenya region to vote for whoever they want for the presidency.

In what is emerging as possible simmering cracks in the Kenya Kwanza Alliance, Kiunjuri told the Mt Kenya region to focus on the leadership abilities of the aspirants and not the parties they are vying on.

The expenditure on the country’s third President’s burial is contained in the national government’s supplementary estimates II for the 2021/23 financial year tabled in the National Assembly by National Treasury Cabinet Secretary Ukur Yatani on Tuesday.

The estimates, however, have not unbundled the expenditure to show how the money was allocated.  President Kenyatta on April 21 announced the death of the former President and, nine days later, his remains were interred at his Nyeri home.

President Uhuru Kenyatta will lead the country in marking this National Prayer Breakfast on Thursday, May 26, at the Safari Park Hotel in Nairobi.