With less than four months remaining into August general polls, the choice of the governor for Nairobi county on an Azimio la Umoja ticket seems to have stirred muddy waters inside the Raila-led camp.

While the coalition’s top brass Uhuru Kenyatta and Raila Odinga seems to have settled on former Nairobi Deputy Governor Polycarp Igathe, a number of ODA allies especially from Western Kenya has warned the coalition against forcing Westlands MP Tim Wanyonyi to step down for anybody.

Led by George Aladwa and Edwin Sifuna, the leaders have insisted that Wanyonyi, who is also eyeing the coalition’s flag under ODM party, will be on the race to the last minute.

Tim Wanyonyi has also refuted claims that he has been convinced to step down in the Nairobi governor race and that he is not planning to do so.

But with clear signs pointing at a probable Igathe candidature, ODM supporters of Tim Wanyonyi have threatened to jump ship and support UDA candidate Jonhson Sakaja for the seat.

On the other hand, a number of candidates who were eyeing the Jubilee party tickets including businessman Richard Ngatia, the incumbent Anne Kananu, and Agnes Kagure among others have threatened to go independent and split votes for the Azimio camp. On the other side, Kenya Kwanza through a consensus has settled on one candidate Johnson Sakaja of UDA to carry the mantle.

Ruto Ahead of Raila in New Opinion Poll 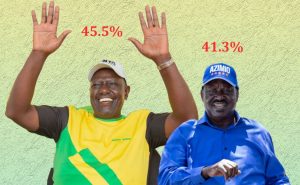 Deputy president William Ruto would defeat ODM leader Raila Odinga if elections were held today. This is according to a new poll conducted Radio Africa.

Ruto was found to have 45.5% support, against Raila’s 41.3%. While none of those meets the 50%+1 threshold, the absence of a strong 3rd candidate, and the 6.7% undecided mean the election would likely won in round one. According to the neighbors, Muthee was living with the suspect with the two living a very quiet life. According to her coach, Muthee met her lover while she was in Qatar. Her husband reportedly works in Qatar.

He denied reports that the Ethiopian was an athlete training in Kenya. However, details have emerged indicating that NARC Kenya party leader Martha Karua who has declared her interest in the Kirinyaga county governor seat is ready to vacate her ambitions to bring down the rule of current governor Anne Waiguru.