A campaign dubbed #lowerfoodprices meant to force the administration to enact policies to cushion Kenyans against the high cost of living continued to trend on social media for the second day yesterday. The campaign began late on Sunday and it aims at raising the attention on the costly prices.

The campaign led to politicians trading barbs and engaging in blame games as most Kenyans are struggling to put food on the table.

ODM leader Raila Odinga accused Deputy President William Ruto and his Kenya Kwanza alliance team of being the root cause of the high living standards faced by Kenyans while the latter blamed the problem on his handshake with President Uhuru Kenyatta.

He further said that the CS should not sign any new loans including floating sovereign bonds during the transition period.

Cooking oil, sugar, maize flour and LPG gas are some of the commodities reported to have become more expensive in the recent months.

Do you think the leaders/politicians are going about the right way to cushion Kenyans against the high cost of living? 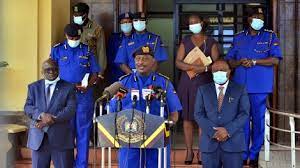 Tomorrow, the head of state is expected to hold a magnificent meeting that is expected to bring together at least 30,000 delegates from the Mt Kenya region in what analysts have interpreted as a scheme to deflate deputy president William Ruto.

Earlier, there were claims that Wiper party leader Hon Kalonzo Musyoka and Baringo senator Hon Gideon Moi who are both the principals of One Kenya Alliance met with former prime minister Raila Odinga.

But Wiper party leader Hon Kalonzo Musyoka who has admitted that there are individuals forcing him to work with Raila Odinga has denied the claims.

President Uhuru Kenyatta is expected to host thousands of people from his Mt Kenya backyard tomorrow as part of an aggressive campaign to mobilise his supporters against his principal assistant William Ruto’s presidential ambitions.