As we fast approach the August 9 General Elections, the biggest headache for the two frontrunners, Deputy President William Ruto and ODM chief Raila Odinga, is who their choice for a running mate will be.

At the moment, DP Ruto’s dilemma is on whether he can afford to pick an individual outside the Mt Kenya region given recent dissenting voices by his allies from the vote-rich region.

On Sunday, Nominated Senator Isaac Mwaura once again piled more pressure on Ruto to pick his DP from Mt Kenya while arguing that the region has over 6 million votes which should not be taken for granted. He had earlier dismissed reports that ANC leader Musalia Mudavadi will be the Deputy President in the new-founded ANC-UDA political marriage.

On the other hand, Ruto’s rival, Raila, seems to have his route relatively easier for him with seasoned politicians like Peter Kenneth, NARC Kenya party leader Martha Karua, as well Wiper party leader Kalonzo Musyoka already touted as the favorite candidates to be his second in command.

However, recent reports indicate that President Uhuru Kenyatta has already thrown his weight behind Peter Kenneth as Odinga’s running mate even as he (Uhuru) tries to woo other OKA members to join the Azimio la Umoja movement.

Do you think Peter Kenneth is the best leader to be Raila’s DP? Should Ruto risk his chances and choose someone outside the Mt Kenya region?

Speculations have been high in the country concerning the game plan being arranged by both President Uhuru Kenyatta and ODM party leader, Raila Odinga.

It’s currently in the public domain that the head of state is rooting for Odinga as his Successor. Something that is jolting those allied to Deputy President William Ruto forcing them to issue statements on the August general election.

During an interview with one of the local Media stations, Kieni parliamentarian Kanini Kega disclosed some interesting details about President Uhuru Kenyatta and his deputy William Ruto.

According to Kanini Kega, Ruto and President Uhuru Kenyatta are not on good terms at all.

He further disclosed that there was no plan to mend their relationship ahead of the 2022 general elections.

Fresh Details On What Ruto Could Be Planning Regarding Mudavadi 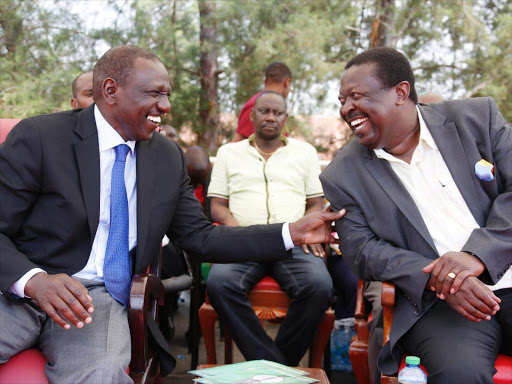 The teaming up of Deputy President William Ruto, ANC Leader Musalia Mudavadi and Ford Kenya Counterpart Moses Wetangula have no doubt shocked the entire country with the once sworn enemies currently working together.

The move came after weeks of speculation with Mudavadi reported having been Angered by Raila’s failure to support him in the upcoming 2022 presidential elections.