But is this the end of a debate that has split the country into two with just a few months to the highly anticipated elections? Apparently, no!

Attorney General Paul Kihara Kariuki is reportedly headed to the Supreme Court to challenge the decision by the Court of Appeal to uphold the High Court verdict that the BBI is unconstitutional despite Raila saying that his team will not appeal COA’s ruling.

A day before the ruling, the former PM had indicated that he would not pursue the matter further and would rather concentrate on winning the 2022 General Election.

However, AG Kihara’s, who is acting on behalf of the President, move to challenge the BBI verdict at the Supreme Court is set to raise eyebrows on whether or not the two handshake partners are reading from the same script.

Do you think AG Kihara’s decision to challenge the BBI judgment at the Supreme Court could lead to a split between Uhuru and Raila?

The move comes barely days after the Court of Appeal declared illegal the push to change the Constitution through the Building Bridges Initiative (BBI) in a landmark decision by a seven-judge Bench.

Members of Parliament allied to both President Uhuru Kenyatta and former Prime Minister Raila Odinga are expected to revive the constitutional changes push through the Parliament this week.

It has been established that the move is after the Court of Appeal ruling on Friday that declared the BBI illegal hence forcing the Pro-BBI legislators to pick up 52 clauses within the report which does not require a referendum to effect. 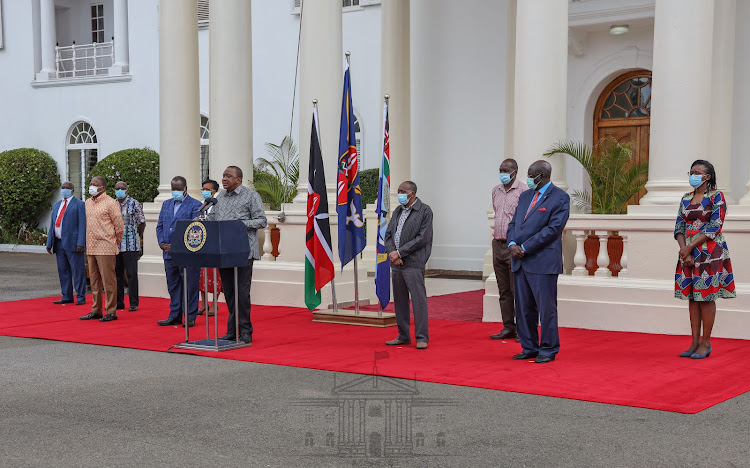 President Uhuru Kenyatta’s cabinet is full of moles who are the ones to blame for his ongoing stream of failures, he has been told.

Uhuru’s initiatives have been flopping, the latest being his push for law changes, resulting in mockery from his critics.