The two were given stiff penalties after being found guilty of defrauding National Cereals and Produce Board at least KSh. 297 million.

Wakhungu is to serve a total of 69 years in jail and Waluke 67 years if they fail to pay KSh. 2.1 billion fine.

Some Kenyans celebrated the sentencing terming it a right move in the fight against corruption.

However, there are those that felt that ruling was wrong.

Waluke’s constituents in Siria held demonstrations a day after the ruling to protest the sentence.

Law Society of Kenya President Nelson Havi also pointed out that the legislator and his co-accused did nothing wrong and blamed NCPB for breaching contract.

“John Waluke and Grace Wakhungu contracted with NCPB. NCBP breached the contract. Arbitrator ordered payment. Award was enforced by High Court. NCPB lost before High Court and Court of Appeal and paid the decree. How can that be a crime? Do not celebrate fraudulent convictions,” he said.

Homa Bay MP Peter Kaluma, who is also a lawyer, differed with his learned friend saying that all those involved in the case from the beginning should be prosecuted.

“‘CONSIDERATION’ is a mandatory requirement of all contracts absent which a purported contract is not enforceable. Fraud vitiates contracts. No single grain of maize was supplied. Arrest the Advocates, the Arbitrator and all judges who sought to enforce/defend this patent fraud!” Kaluma said.

Ahmednasir Abdullahi, one of the lawyers who initially represented Waluke and his co-accused in a case against NCPB, said acknowledged receiving some of the money but he has no apology to make.

“I was instructed to as lead lawyer to lead the lawyer on record in two applications before the Court of Appeal.. I was successful in both… I charged fees and was paid… I have ZERO APOLOGY for that,” said the senior counsel. 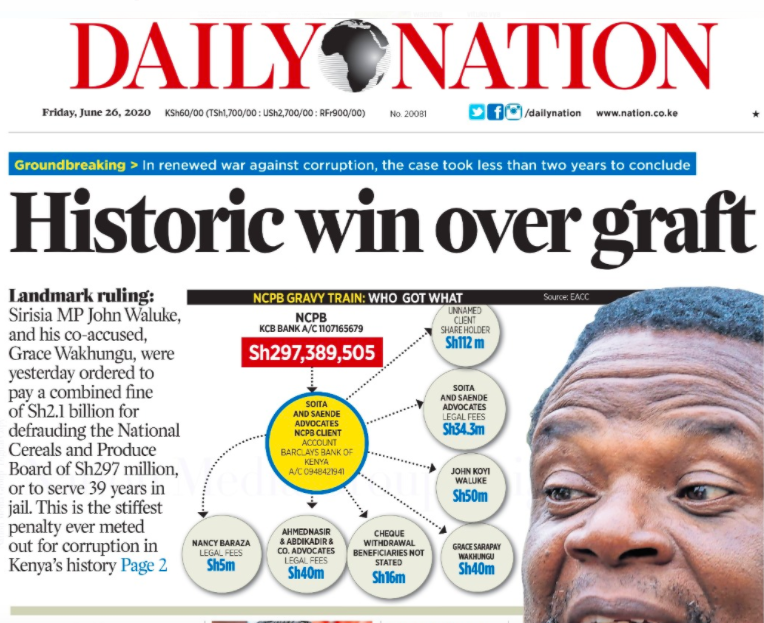 It is from this ‘revenue split’ that the likes of MP Kaluma feel that all those named in the scandal should be held accountable. What’s your take? Should the lawyers also be charged? Was the ruling fair?

Join the discussion. Share your thoughts in the comments section.