The German Bundesliga became the first top flight league to resume in what was a step forward in the war against the Covid Virus.

Below are some of the things that we noticed

Even without the reliable Axel Witsel, Borussia Dortmund tore Schalke a new one in the Revierderby. The home team put four past David Wagner’s team to go a point behind Bayern Munich.

Key to the victory was Julian Brandt who played a role in three of the four goals. The German International is seen as the natural heir to Mesut Ozil in the national team and did his reputation no harm with that performance.

Even before the break, Julian Nagelsmann and his RB Leipzig outfit were slipping behind in the title race. They needed a late goal to secure a home point at home to Freiburg.

The Red Bull funded team is now three points behind Dortmund and risk falling out of the top four. 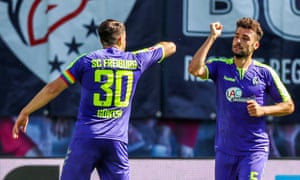 The manner in which this comeback would be conducted was under numerous microscopes all over the World. However, the Germans handled it brilliantly which offers hope to other Football Federations.

Players were well protected and observed social distancing rules even arriving in scarcely populated buses. The bench players were all distant from each other and wore masks too! The Germans have set out a blue print for the others to follow.