Health CS Mutahi Kagwe has besieged Kenyans to continue supporting the government’s policies set in place to curb the spread of coronavirus in Kenya.

Speaking on Wednesday, during the daily press briefing on the COVID-19 disease, Kagwe advised Kenyans to ignore all those people who were attacking and derailing the state’s efforts, stating it was so unfortunate that some naysayers in the country have dismissed the briefing as mere daily ledgers. 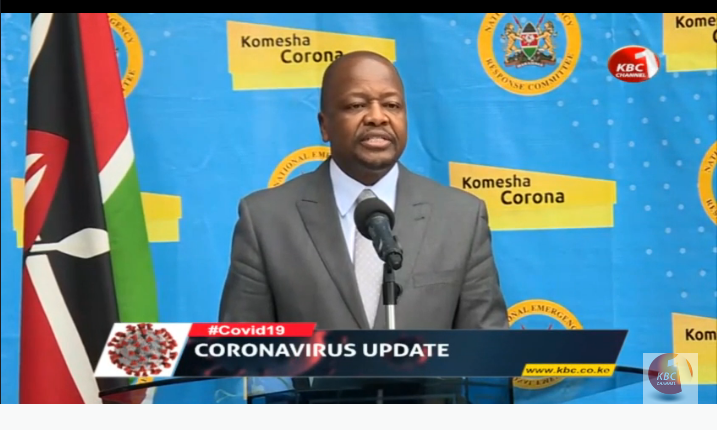 Kagwe stated that the government had refused to sit back and watch adding that they will continue to inform Kenyans of what they should do to flatten the curve.

“Let us take heed to what the government is saying… it is every Kenyan’s effort to take part in the fight. This is our disease. It can affect me and it can also affect you. Do not listen to all those who are attacking us or derailing our efforts. Those who are helping us, are those who are following the measures we have put in place” stated Kagwe.

CS Mutahi Kagwe: There are a few Kenyans who revoke the efforts we have put. It’s unfortunate that some nay sayers have dismissed the briefing as mere daily ledgers. We refuse to sit back and we will continue to inform Kenyans of what they should to flatten the curve pic.twitter.com/80iPUxcRD6

Kagwe also revealed that mass testing of Kenyan citizens was ongoing. “We currently have 25,000 testing kits. Globally every country is setting targets for mass testing. We hope to have done 250,000 tests by end of June, this is a fraction of our population” he added.

Following rampant cases of the virus reported from Mandera county, the CS revealed that the government had restricted movements in and out of the county.

The decision to partially lockdown Mandera county, according to the CS, was informed by the fact that the county borders two countries to the North Eastern.

Mandera now becomes the 5th county in the country to undergo partial lockdown after Nairobi, Mombasa, Kilifi and Kwale counties.

So far, the county has reported a total of 8  COVID-19 confirmed cases.

At the same time, the CS announced that seven Kenyans had tested positive from the 707 samples taken in the last 24 hours, taking the total number of confirmed cases in the country up to 303.