Health CAS Mwangangi has announced a raft of measures to curb further spread of COVID-19.

Speaking during the daily briefs on the current status of the pandemic, warned Kenyans ignoring social distancing measures that they would face the full force of the law. In particular, she said that Kenyans using wines and spirits joints to drink would be arrested.

She revealed that the government will deploy technological surveillance to arrest those congregating after curfew. 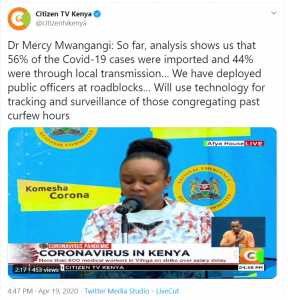 Seven are Kenyans and one is a foreign national, all with no history of travel.

Three more have also recovered bringing the total to 67.

She also reported that two other persons have died bringing the total fatalities to 14.

Dr Mwangangi announced that anyone caught violating the curfew order would be arrested and treated as a contact person and therefore tested for the COVID-19.

She further urged Kenyans to be careful not to buy masks that wouldn’t help them after reports emerged that some unscrupulous traders were recycling the masks and selling them to unsuspecting Kenyans.