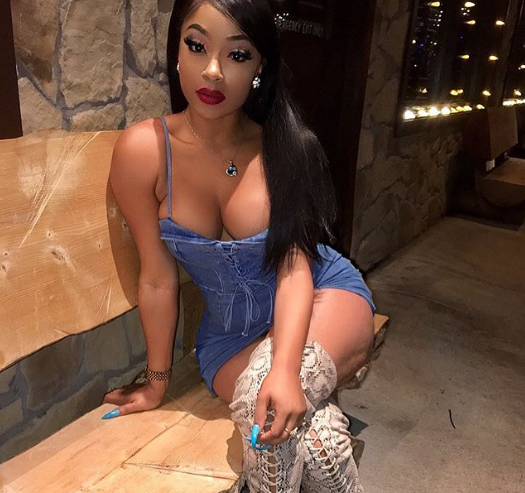 Khaligraph Jones has been making music headlines after releasing his latest song for his sick lines and exquisite taste in his choice for video vixen.

His latest single dubbed Roll With You is unlike the Khaligraph most people love and fear in equal measure. He brings out his vocals for this one in a T-Pain kind of style. This is a song that would be considered a love song in a millenial kind of way.

Big Shout To @jeffadairfilms for the Amazing visuals, International standard Only Song Engineerd by @r.s.sixtysix and Instrumental created by @kdagr8est

The video vixen in the song got the attention of many fans because of her beauty and curves, so Opera News went to work to give you more details about her.

Her name is Amber Alexxa and the reaso she looks exotic is because she is. She is based in Atlanta and Dallas in the USA.

She describes herself as a Dallas model, actress, host, brand ambassador and owner of Gliss EYE Candy.

I’ll take yo n*gga and keep mine too ✨ Photographer: @nextlevelimages_

The curvaceous beauty is bisexual as she openly admits she likes girls and guys too. She likes rough manly men where men are concerned.

Her curves might fool you but Alexxa is also a mother to a young boy. She got pregnant when she was in high school at just 17 years old and hence dropped out of school. She never completed her high school but has been to college.

She is a single mother as her baby daddy ditched her when she was 5 weeks pregnant saying he went on vacation. Thanks to a good support system and her parents, she has been able to raise her son so far.

She has appeared in many music videos in the States and has interacted with the likes of International superstar Rick Ross.

Tell me your thoughts! I’m listening! Bts with @filmsbyprophecy🔥