Kisumu governor, Anyang’ Nyong’o, on Friday shocked the nation, after he appointed himself as the county’s health minister in an acting capacity.

In a press release seen by Opera News, the county head announced an array of changes to his cabinet, including redeployment of the county’s health CEC to the Business, Cooperatives and Marketing docket.

In the statement, he also indicated that he had nominated one Joyce Atieno Osogo to the Roads, Public Works, and Transport ministry.

”In the meantime, the Department of Health and Sanitation will be managed by the governor himself before the appointment of a substantive CECM,” the statement added.

Kenyans, in their usual fashion, were quick to question and mock the governor’s self-appointment, wondering what financial perks awaited him. 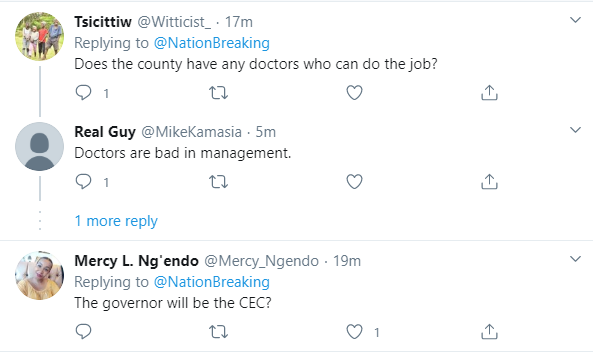 Nyongo’s move comes a day after the city of Kisumu experienced a coronavirus scare, which, luckily, did not amount to an actual positive case.

The 70-year-old man, of Caucasian origin, had reportedly exhibited signs of the dreaded infection and was isolated at the Aga Khan Hospital in Kisumu.

Earlier, Nyongo revealed that in preparation for a possible coronavirus outbreak in the county, isolation wards had been set aside in several sub-counties, complemented by a counselling centre at the Jaramogi Oginga Odinga Hospital in Kisumu.