Kinoti played CCTV footages of the office of the deputy president in Harambee House Annex, Nairobi. 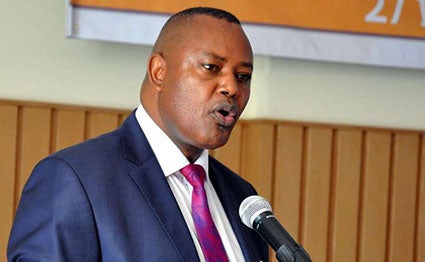 After a detailed analysis of the footage, the DCI boss revealed that part of the CCTV footage was edited to conceal Kenei’s involvement in Ksh 39.5 billion fake arms tender.

The footage shows that Kenei on duty in the DP’s office when former Sports Cabinet Secretary Rashid Echesa and two other men arrived to sign the multibillion deal.

Kenei was spotted looking at his phone frequently, hence, the detectives say that he might have been taking orders from another person.

From the thorough investigation, the detectives have established that the deceased was killed.

His murder has been described as a brutal one, and later on, stage-managed to appear like a suicide.

The investigators are yet to establish the motive of the murderers and where the crime was orchestrated.

When asked on Kenei’s involvement in this crime, the detectives did not establish Kenei as a suspect but rather a witness.

Kinoti also revealed that Echesa and his allies were in Ruto’s office for 1hr 22mins 29secs and not 23 mins as earlier stated.

Here is a video of Echesa and his accomplices at the DP’s office: