Twenty-seven Embu Prison inmates have been diagnosed with tuberculosis, the officer in charge of the facility Henry Ochieng said on Tuesday.

The officer said that one inmate has been admitted at Embu Level Five Teaching and Referral where he is being treated. 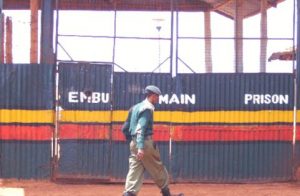 According to Ochieng, the situation is under control and the infected inmates are being managed at the prison and are responding well to treatment.

According to Citizen TV, the patients at the facility have been mixing freely with others in the congested institution with only seven inmates getting special treatment.

TUBERCULOSIS OUTBREAK IN PRISON
27 inmates infected following an outbreak at Embu Prison
One inmate receiving treatment at Embu level 5 Hospital
24 inmates have been isolated in one cell block #NewsNight pic.twitter.com/Bx3NhGMgzp

Ochieng said plans are in place to ensure that the infection does not get out of hand however the congestion in the facility may make the matter worse.

The prison has 1,300 inmates and the officer dismissed reports that the facility is overcrowded saying that it is the correct capacity of the prison.

The inmates are now worried that those who are healthy will be infected too in no time.

The bacteria that cause TB are spread from one person to another through tiny droplets released into the air via coughs and sneezes.