Speaking in Tigoni, Kiambu County at the burial of fallen businessman and politician Nginyo Kariuki, Wa Muchomba hinted at a possible power shakeup as she throws support for the Baringo Senator Gideon Moi.

The woman rep disclosed that Mt Kenya leaders are ready to throw their support behind Gideon Moi come 2022. 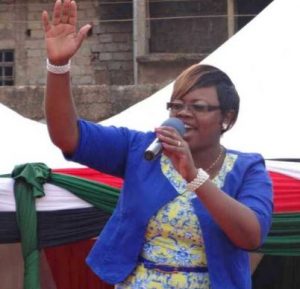 Wa Muchomba urged the Baringo Senator to steer the KANU party ahead and ensure that it is stable.

Her sentiments were echoed by Kiambu Governor James Nyoro who urged Gideon Moi to lead the party saying that most parties founded in the advent of multiparty politics had been rendered functionless.

The veteran Politician was eulogized as a champion for multiparty democracy an astute businessman.

Senator Gideon on his part eulogized Nginyo as an astute businessman and finished his speech with an assurance that his party was unshaken.

“He (Nginyo) was a golf legend, an astute businessman and a tactical politician. KANU iko. It will always be.” Gideon said.

President Uhuru Kenyatta who was set to attend the burial service failed to do so citing engagements in a meeting on tackling the Coronavirus menace.

The President was represented by the Attorney-General Paul Kihara Kariuki who read his condolence speech.

“The President was even dressed for this function to be with you and say fare thee well to his friend,” Kihara said.

Nginyo, a renowned businessman and a politician, participated in the formation of the TNA party which propelled President Uhuru Kenyatta to power in 2013.