Deputy President William Ruto was in the receiving end of criticisms from ODM Leader Raila Odinga in a Wednesday night interview on KTN.

In the interview, Odinga said that he was Ruto’s teacher having recruited him to the change movement and helped him gain his political skills. 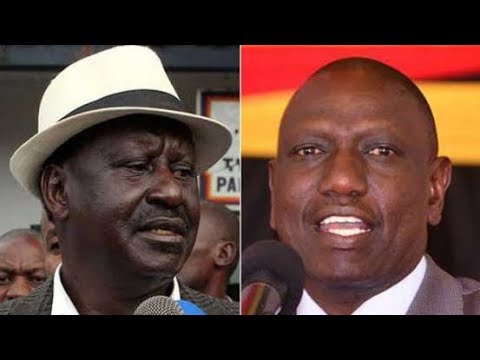 The sentiments by Raila called the attention of former Chief Justice Willy Mutunga.

According to Mutunga, students can be brighter than their teachers.

The law expert insinuated that Ruto could be smarter than Raila who brags to be his political potter.

Ruto who is fond of responding to critics with bibble verses and religious hymns could only agree with Mutunga’s sentiments.

On Thursday afternoon, Odinga continued with his scathing attacks on his politics student.

“The theft of public resources is now called hustling. The sacking of corrupt and incompetent individuals is now called targeting our people,” he said.

Ruto has declared himself as a hustler whenever questions of his source of wealth arise.

The theft of public resources is now called hustling. The sacking of corrupt and incompetent individuals is now called targeting our people. Changing this pattern of events is not going to be easy. But it must and has to be done or we will have no nation to save. |FOPA BBI Forum pic.twitter.com/9BBMlJnjEY

The two are set to share the same podium in a BBI Rally to be held in Meru County on Saturday.

This has brought about tension and disagreements among leaders from the Mount Kenya Region.

Tharaka Nithi Governor Muthomi Njuki claimed that there is a plan to send Boda Boda youths to disrupt the meeting at Kinoru Stadium.