Nairobi governor Mike Sonko has finally spoken out, hours after handing over the administration of Nairobi County to the national government.

Sharing a video of himself pleading with President Uhuru Kenyatta to intervene in the murky Nairobi county administration situation,  Sonko dispelled rumors that the role was forcefully taken away from him, owing to his inability to effectively execute his duties as a county head, after he was blocked from office by the court.

In the video, Sonko pours out his heart to the head of state, saying that cartels rooted deep within Nairobi had been interfering with his service delivery.

He further asks the president to assist him to weed out corrupt untouchables in the county, offering to give up roles such as revenue management and county planning to the national government.

”Tunaomba uingilie hiyo kazi mheshimiwa rais. Vile ulifanya KRA ukapeleka wafisadi nyumbani, naomba msaada wako Nairobi mheshimiwa rais (we request that just as you did at KRA and sent corrupt officials packing, you also need to assist me in Nairobi),” Sonko said, during the launch of the Nairobi Expressway in Oct. 2019.

In his social media post on Tuesday, just hours after State House announced the surprise move, the governor promised the Nairobi electorate service delivery, putting aside political and court slideshows aside. 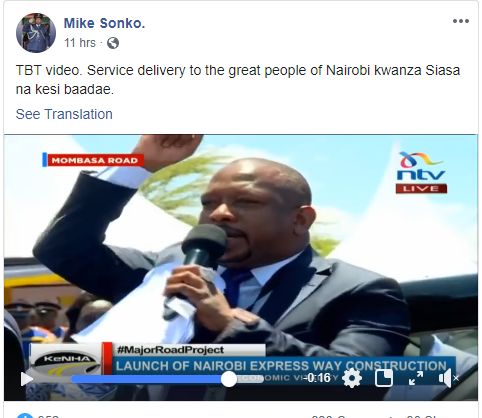 It is still unclear what mandate the governor will execute going forward.