President Uhuru Kenyatta on Friday necessitated the release of a man who was jailed for two years for being in possession of a python without a permit.

The convict was released from Shimo la Tewa prison in Mombasa after President Uhuru Kenyatta intervened and paid his Ksh 1 million fine.

Mr Benedict Karisa, the convict, says he was summoned by the Coast regional coordinator John Elungata and informed of his release from prison.

The 30-year-old was apprehended at the Likoni crossing on the morning of February 11 with a 10 kg python measuring 2.3 metres. 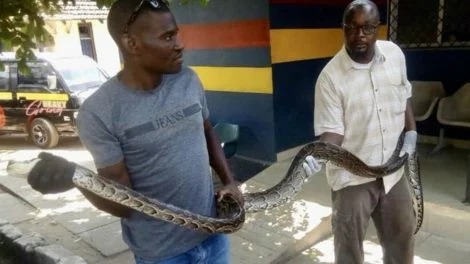 A report by the Kenya Wildlife Service stated that he wrapped the reptile in a white bedsheet and put it in a black suitcase.

Mr Karisa was taken to the Likoni Ferry Police Station and arraigned on February 14.

There was an uproar, however, after Mombasa Resident Magistrate Vincent Adet issued the prison sentence.

The Magistrate, while delivering the sentence, said that the suspect having worked with the Kenya Wildlife Service should have known that a permit was needed in such circumstances.

The suspect was fined Ksh1 million or in default serve two years in prison.

The magistrate explained that the accused knew he needed a permit as he had worked for the KWS.

But via social media, some members of the public poked holes into his quick arraignment, noting that big fish in various cases had not been punished in any way.