Taking to his twitter account, he urged Ledama to instead refer to land use and physical planning Act to achieve his perceived goal instead of, “stirring the hornet’s nest.”

Earlier on, Ledama had affirmed that “Maasai issues will be better articulated by Maasais and am not going to apologise for that.”

To add on to that he said it was time to annoy some people by telling the truth, “Maasai land belong to Maasai People(sic).”

He directed his statement to Nyeri Town MP, Ngunjiri Wambugu, telling him that if he felt dissatisfied he should, “sell some of your(Central) lavish tea plantation in your counties.” An utterance that caught the eye of Makueni Senator.

My brother Ledama ole Kina, allow me to advise . Stand down . We want peace. I championed the land use & physical planning Act . Let’s use the Act to achieve your goals without stirring the hornest’s nest .

In Narok earlier on in the day, two leaders walked out of a stormy Building Bridges Initiative meeting organised ahead of Saturday’s rally over claims of tribal profiling.

Emurua Dikirr MP Johana Ng’eno and Narok Deputy Governor Evalyn Aruasa walked out of the meeting after the daughter of the late William Ntimama, Leah claimed the position of governor and deputy belong entirely to the Maasai community.

Ng’eno and Aruasa claimed the remark made in the meeting that was supposed to be attended by all the leaders had disintegrated into “ethnic profiling”.

Contrary to earlier reports that the two leaders were not given a chance to defend themselves, those in the meeting claimed the deputy governor and the MP just walked out throwing up their hands.

Leah had just completed talking when she added; “Narok made a very big mistake to have a Kipsigis deputy governor.”

After the two leaders walked out, former Prime Minister Raila Odinga walked into the meeting and announced that he had met with President Uhuru Kenyatta to discuss the “burning issue of the Kitet Maasai” on the disputed Kedong Ranch sitting on 75,000 acres. 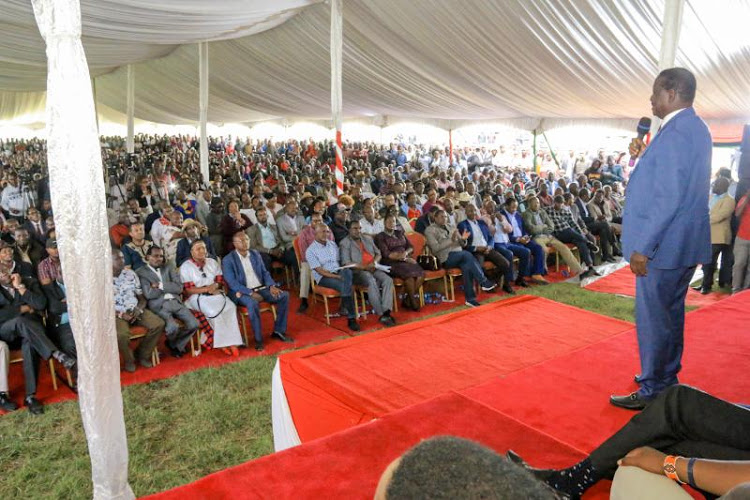