We Thank God for Another Friday!

February is flying despite the runaway tomato prices. The good thing about Kenyans is that we always find a way to survive even in the most trying of times. We wonder why our brothers in Ukambani are yet to release a song on the tomato prices.

BBI rallies are back, this weekend all roads lead to Narok where the Maa Community will air its views on the report. Already, area Senator Ledama Ole Kina has raised eyebrows following his declaration that non-locals will not be allowed in the event.

It is ironical that Ole Kina could be allowed to make such remarks on live TV. It is even worse that he is trying to create divisions at a function meant for building unity!

Before being elected Senator, Ole Kina had worked in America, the cradle of civilization, for more than 20 years. Didn’t this guy learn a few lessons about racial and ethnic discrimination?

As a politician, the Senator is likely eying the Narok Gubernatorial seat in 2022. He hopes to create an ‘us vs them’ scenario where the Maasai Community will unite against the other tribes in Narok.

In other words, these are war drums. Ole Kina should be arrested and charged before it is late.

Deputy President William Ruto has urged detectives to speed up investigations into the mysterious death of an administration police officer who was found lifeless in his house on Thursday, February 20.

The embattled Jubilee deputy party leader, whose office has been dragged into the multi-billion military tender scam, said he was deeply saddened by the death of police sergeant Kipyegon Kenei who was on duty when Rashid Echesa and two foreigners visited his office.

The MCAs listed 16 grounds for removal of the governor, including abuse of office and irregular procurement of services.

These include irregular awarding of a Ksh1.5 billion tender for construction of stadia, among them Dandora Stadium.

Why Gideon is Not a Match for Ruto 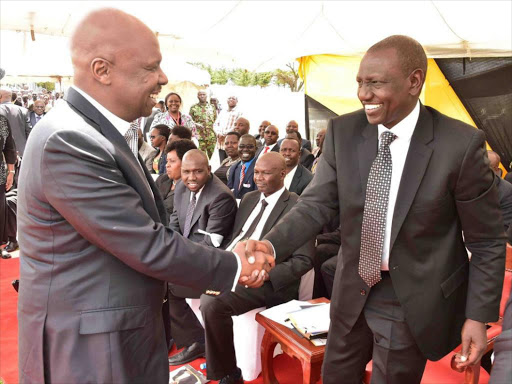 Though he was anointed by his father, former President Daniel Moi, Baringo Senator Gideon Moi faces an uphill task to topple Deputy President William Ruto as the political kingpin of the vast Rift Valley.

Both men have said they want to be president, Gideon is yet to trumpet his ambitions.

Detectives are investigating the mysterious death of AP sergeant Kipyegon Kenei who was found with a bullet wound in his house on Thursday. Kenei was on duty at DP William Ruto’s Harambee Annex Office on the day Rashid Echesa and two foreigners visited. Do you think his death is related to the case?