An earlier morning AMLive show at NTV nearly came to a halt after leaders allied to Deputy President William Ruto and opposition chief Raila Odinga took on each other with war of words on Tuesday.

The drama started after the name of the deputy president was dragged into the current fake firearm scandal facing ex-sport CS Rashid Echesa. 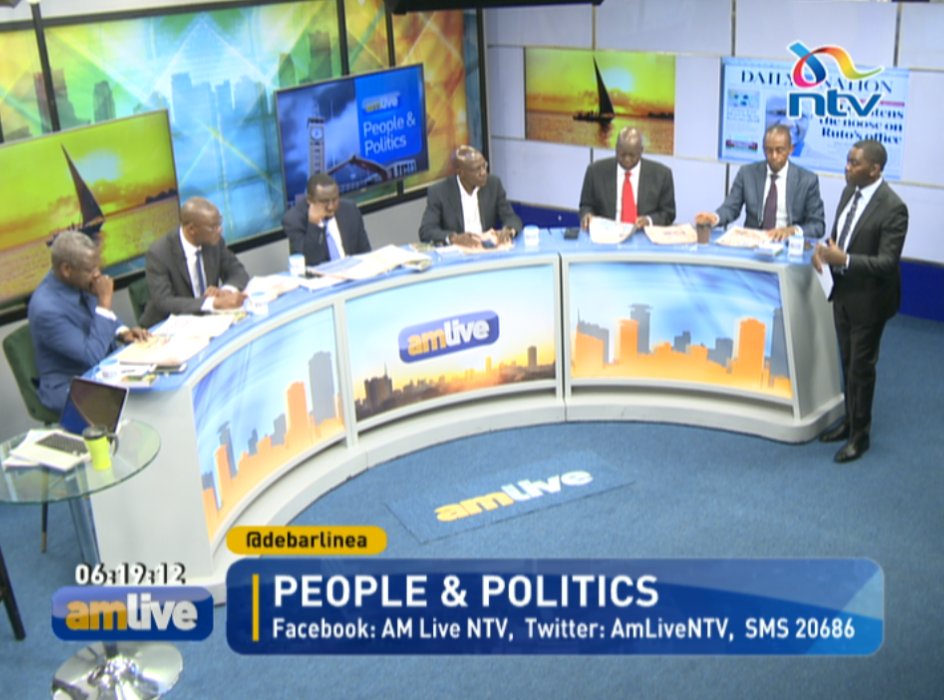 According to the former Gem MP Jakoyo Midiwo, the headline carried by Nation Newspaper, DCI tightens the noose on William Ruto’s office was in order and not misleading as claimed by Kericho Senator Aaron Cheruiyot.

“How can it be wrong to go with the headline when the DCI is actually investigating the office?” posed Midiwo. Midiwo accused Cheruiyot together with former Kakamega Senator Boni Khalwale, who was also present at the show, of defending the fraudsters.

Midiwo went ahead to claim the DP was a thief who was always fond of bragging about his massive wealth which he said was acquired through questionable means.

But coming to the defence of his boss, Senator Cheruiyot, seemingly irritated, lashed out at Midiwo claiming the former legislator was senselessly speaking without having any facts.

“I know Jakoyo’s mouth, the minute it begins to run, he disconnects his brains. that is exactly what he has been doing for the last five minutes…” responded Cheruiyot.

While accusing Jakoyo of abuses, Cheruiyot reminded him to live to the expectation of his title as a former respected legislator.

At one time, the Senator threatened to quit the show after a photo alleged to be that of Rashid Echesa together with William Ruto’s daughter June Ruto in Poland was displayed by the host.

Rarieda MP Otiendo Omollo on his part told off Cheruiyot claiming he was taking things too personal by allowing emotions to drive him.

Omollo accused Cheruiyot and Khalwale of using diversionary tactics as one way of evading questions on the scandal which is already in the public domain.

Khalwale, while retaliating, accused Raila allies of majoring on allegations without having any tangible evidence to back up their claims.

The bullfighter accused Midiwo of soiling Ruto’s name as one way of ensuring that the DP loses against Raila Odinga(Jakoyo’s cousin) in 2022.