There was Drama on Tuesday morning at NTV’s AMLive show after Kericho Senator Aaron Cheruiyot threatened to walk out of the studio over a controversial photo of ex-sports CS Rashid Echesa together with William Ruto’s daughter June Ruto.

The drama started after the host showed a photo of the embattled former CS together with Ruto’s daughter allegedly in Poland.

The seemingly irritated senator quizzed the host on the particulars of the photo, accusing him of misleading the nation through an illegal photoshop.

Cheruiyot threatened to leave the show if the host, Debarl Ainea, continue majoring on a photo which he stated was fake and misleading.

“We can leave this show for you if you continue getting to a point of picking cheap photoshops like what you are doing. Here is the actual photo from the company contrary to what you are trying to show the nation,” shouted the angry Cheruiyot while displaying the photo.

His comments were echoed by former Kakamega Senator Boni Khalwale who accused the media spreading much fake news concerning the whole scandal.

According to Khalwale, it was wrong for the media to continue ‘peddling lies’ without first waiting for the forensic experts to conclude their analysis on the scandal.

However, their threats fell on deaf ears as the host and a number of other panellists who included Rarieda MP Otiende Omollo insisted on knowing William Ruto’s role in the alleged fake arms deal.

The photo has so far elicited mixed reactions from a section of online users with most of them questioning its authenticity. 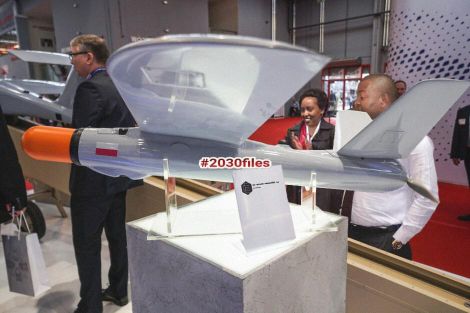 Many were swift to notice the fault within the photo, arguing that it was photoshopped and not original as insinuated by others.

On Facebook, William Ruto’s ally who is also a blogger Dennis Itumbi, rubbished the photo, while exposing the fake image with the original one which did not have Echesa and June Ruto in it.

“The Original photo. Post it where the PHOTOSHOP ‘experts’ are sharing it. #SystemYaFacts Also remind them Kenya has NO embassy in Poland. Poland falls under our Embassy in Rome, Italy. Tell them to Google the Kenyan ambassador to Italy or to like the FB page of the embassy,” read Itumbi’s post.