Barely five days after the government of Kenya through the ministry of interior deported four Chinese nationals who were captured on camera caning a Kenyan, another video alleged to be of a Kenyan man being whipped by a foreigner has emerged. 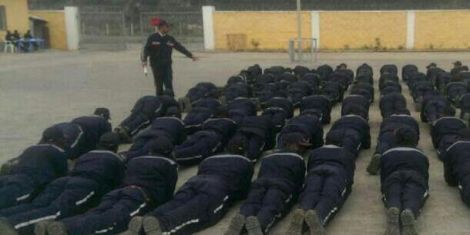 The video which was shared on twitter by one user @MuthuiMkenya shortly went viral with former Gichugu MP Martha Karua taking to the internet to demand the authenticity of the video and the place the inhuman act took place.

The shirtless man, who also had his mouth gagged by a piece of cloth probably to prevent him from wailing, is seen rotating with the chair as the whippings continue.

Unable to take further whippings, the man loses control and rollover with his hands still tied to the seat.

At the far end of the room, is another black man seating down on a floor probably waiting for his turn or simply recuperating from the beating.

Although it was not immediately established the exact location where the video was taken, it is suspected that the whole ordeal took place in one of the far East countries, where most Kenyans have been flocking looking for employment opportunities.

Where on earth is this ? https://t.co/mT4WMCNWys

@BMueni Replying to @MuthuiMkenya The gvt of Kenya might as well divide Kenya into pieces and give it out to the rest of the world . What the hell do Kenya stand for why do we have to compromise in everything, who does this to any living thing ? Coward bustard .

It’s Saudi Arabia. The guy being whipped is from Kenya🇰🇪 according to former lady Senator/MP from Bura Coast. Regardless the Nationality of the victim NO African should step foot on Arab land they are evil dirty humans on earth specially Saudi and UAE.

@BandareroFred Replying to @MuthuiMkenya Kenyans being whipped Home and Away all in the name of looking for greener pastures.

the sad reality is the problem is us not them, just look at the Kenyan being beaten by the Chinese, he was not defending himself, because the job was mo important dan his dignity, sometimes u need 2 sacrifice one person to save others. u kill it enemy even if u r on foreign land

This is what many Kenyans are going through in the hands of forrners..either in Kenya or out side Kenya.. So sad

Whoever goes to Middle East to work is a slave before leaving the country. Arabs are animals when it comes to staying with others. Sadly African leaders still think we are living in 1500BC

The language in the background seems to be Urdu, its a Pakistani language. Even the guy is dressed like a Pakistani.