CCTV footage from Langata Road showed how an over-speeding vehicle veered off the road and rammed roadside trees on Sunday morning.

According to a police statement, the driver of the Mercedes Benz E350 vehicle lost control of the car and hit trees before landing on a nearby perimeter fence. 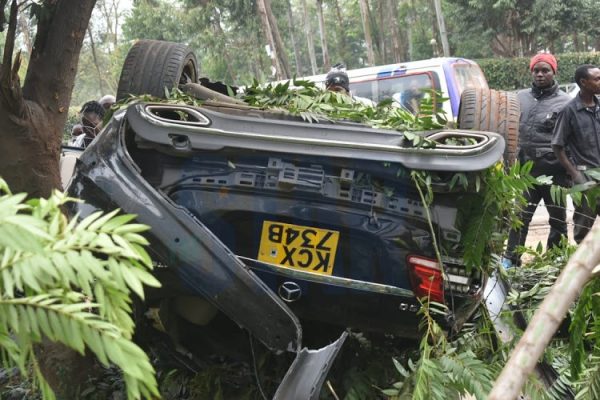 A short extract of the footage shows a vehicle on high speed, flying off the highway, hitting and felling trees along the road.

Langata Deputy OCPD John Sichei said the accident may have been as a result of drink driving as the man is said to have been moving from Weston Hotel.

In a press statement released on Monday morning, the William Ruto-owned hotel said that the driver only stopped over at the facility while appearing disturbed.

The hotel management went ahead to distance itself from the accident victim saying that he had no connection with them.

When the accident occurred, reports indicated that the deceased was Kelvin Rono, an aide to Deputy President William Ruto.

However, after further police investigations, it was later found that Kelvin was a victim of mistaken identity.

After the news of his death spread like fire in all media platforms, Kelvin took to social media to state that he was not involved in the accident.

He noted that rumours which emerged following the crash, claiming the accident was linked to the ongoing court case against ex-sports CS Rashid Echesa, were a threat to his life.

”In regards to that I would like to request the concerned authority to provide me with security since I am now living in fear in line with the alleged fraud,” he stated.