The governor took to his social media pages to share an emotional video of one, Jane Muthoni, who, alongside Jubilee Party Secretary-General Rapahel Tuju, had been reportedly involved in a grisly accident in Nakuru before the burial of the late former president Daniel Moi.

“As we continue to pray for the Jubilee Party SG and Special CS Hon. Raphael Tuju let us remember to pray for other victims of the accident among them Jane Muthoni who was involved in the same accident,” Sonko captioned.

“I was contacted by a Gospel Musician Liankey who requested for my help after Jane was discharged from Kijabe Hospital but was unable to leave due to payments. Through Sonko Rescue Team we helped clear the hospital bill.”

Sonko went on to reveal that through his intervention, Jane was discharged from the Kijabe Hospital but she developed complications and his team transferred her to Mama Lucy Kibaki Hospital where she is undergoing further treatment.

Many Kenyans had expressed their disappointment in the aftermath of the road accident involving CS Tuju and passengers who were on board a Nuclear Sacco matatu on Wednesday morning, arguing that much attention was given to the Jubilee Party boss as the other victims languished in pain.

“May the Lord sees u through all tribulations.. And because of Good things u are doing to many Kenyans .May the Lord remember you,” said Prince Mapesa.

“Governor Sonko am humbled by your actions .GOD BLESS YOU,” added another Facebook user.

“My honorable sir governor, you are a savior to mankind, what would we do without you, BUT you ignored our cries on the broken roads in parklands and city park estate,” added Shazad. 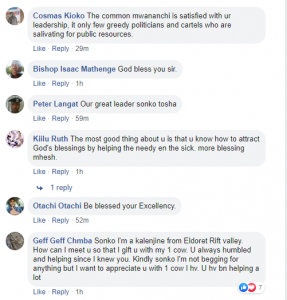 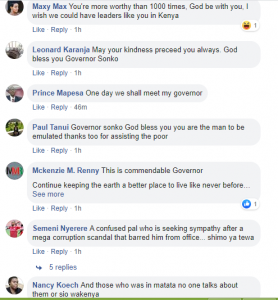 The Jubilee Party had on Friday issued an update on the health of Tuju who is currently admitted at the Karen Hospital.

Through a statement sent to newsrooms, the party stated that Tuju is responding well to treatment and has made good progress so far.

“He is responding well to treatment and making good progress in his recuperation.

“As a party, we are in close contact with his immediate family and they have expressed satisfaction with the level of care being provided,” read the statement signed by Communications Director Albert Memusi.