The luxury vehicle that was initially believed to have killed a close aide of Deputy President William Ruto on Sunday, was erroneously registered in the National Transport and Safety Authority (NTSA) database.

According to photos and videos from the accident scene along Langata Road, the vehicle, a Mercedez Benz KCX 734B, belongs to the E350 class. 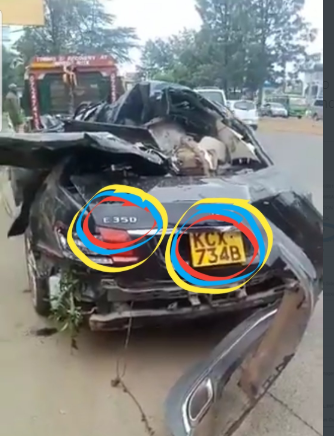 However, NTSA registration details of the vehicle, which is owned by one David Kipruto Ronoh, indicate that the automobile is part of the s350 series. 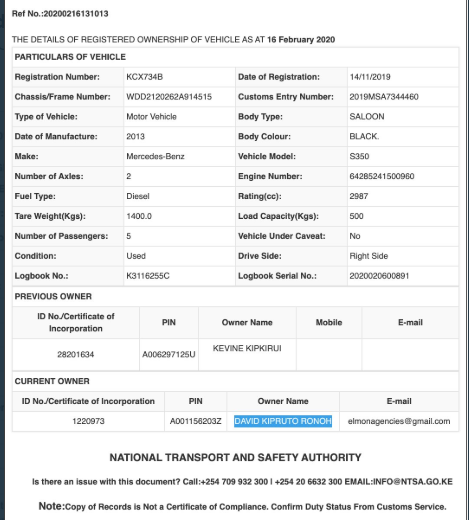 This raised eyebrows among hawk-eyed Kenyans on the efficiency, or lack thereof, of government authorities charged with motor vehicle registration and importation surveillance.

Some netizens raised concerns that the owner of the vehicle at the time of its purchase might have colluded with corrupt customs officials, to conceal the actual value of the vehicle, in tax evasion efforts.

According to several vehicle dealerships catalogues, the price of a Mercedes Benz E350 ranges anywhere from Ksh2 million, while the S350 series retails at around Ksh1.7 million.

Police are yet to clarify the identity of the motorist who died in the Sunday morning crash.

Kelvin Rono, the alleged dead driver, on Sunday, however, spoke out, asserting that he was alive and well and was ”enjoying life in Karen.”

He asked Kenyans to stop spreading rumours about his death, noting that this had negatively affected his close family and friends.

He further asked the government to provide him with a security detail, since he was afraid for his life after his ‘death’ was linked to an ongoing fraud case against a former Cabinet Secretary.