Cabinet Secretary Raphael Tuju will need prayers from Kenyans as reports reveal that the serious injuries he sustained in an accident will take a longtime before healing.

President Uhuru Kenyatta was among the first officials to be informed about the accident that left Jubilee Secretary General Tuju and 14 others with serious injuries.

According to eyewitnesses, Tuju’s Prado collided head-on with the matatu heading to Nairobi that swerved the road to avoid accident, hitting another vehicle that had slowed down.

Tuju had broken ribs and injury in his intestines. He was first airlifted to Kijabe Hospital then to Karen hospital. At Karen he is under his personal doctor. 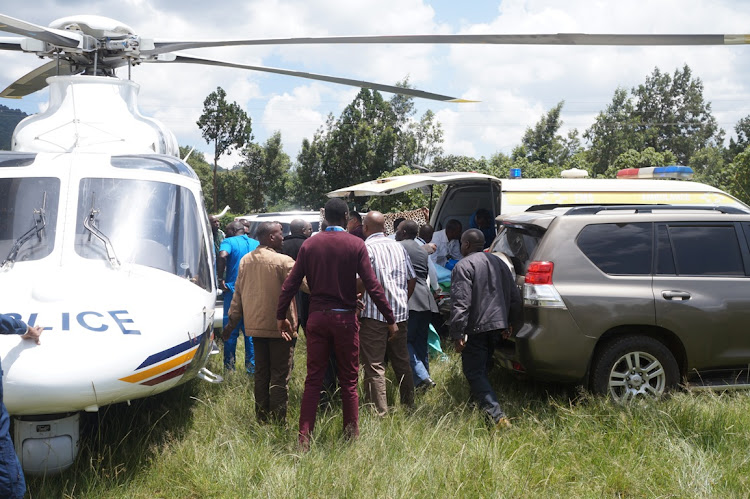 Blogger Robert Alai has since revealed all of the CS’s ribs had fractures.

All of CS Tuju’s ribs had fractures. May he be healed. It’s going to be long but I pray for his survival. He is a fighter.

I met the man two to three years ago and I can tell you that he is one of the level-headed and focused leaders in the country.

May you be healed Raph

When Tuju was taken to the hospital he complained of chest and abdominal pains. After tests and scans were conducted doctors said the intestines had been raptured probably by the lower safety belt because of the impact of the collision between his car and the matatu.

On Wednesday night, top government officials trooped to Karen Hospital to see him but in vain. They were informed he was resting and only saw him from a distance in the ICU where he had been admitted.

The accident happened at Magina area along the Nairobi-Nakuru highway. The driver of the matatu involved in the accident was badly injured and was on a life support machine.