Jubilee Secretary General, Raphael Tuju has been admitted to the Intensive Care Unit at the Karen Hospital in Nairobi.

Tuju arrived at the facility on Wednesday afternoon having been airlifted from Kijabe Mission Hospital in Limuru.

This was after an emergency surgery performed on him at the mission hospital to control active bleeding in his abdomen.

After the surgery, his personal doctor requested that the SG should be accorded further care, hence the immediate transfer to the Nairobi based health facility.

Tuju, suffered serious abdominal and chest injuries after being involved in an accident at the Nairobi – Nakuru highway.

He was on his way to Kabarak to attend the burial of the late President Daniel Arap Moi when the fateful accident occurred at around 6;45 am. 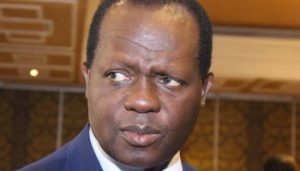 The accident involved Tuju’s vehicle, a public service vehicle and another private car.

Apart from Tuju 5 occupants of the three vehicles were seriously injured with 12 others having suffered serious injuries.

The Matatu driver suffered serious injuries and was placed in the intensive care unit of Kijabe hospital.