Raila, who is deeply rooted in the Luo tradition mourned Moi in style while dressing in traditional Regalia.

With his Fly whisk raised up, Raila sang a Luo traditional song that is meant to praise fallen heroes. 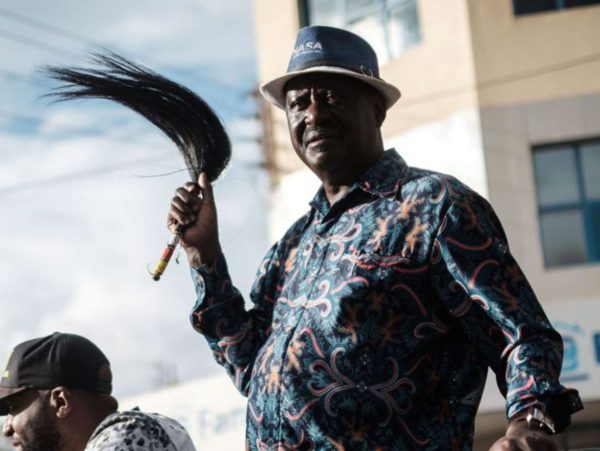 An African man, complete with a fly whisk got mourners charged up as he sang, saying “Ee wooii …….Jowi… “

Raila repeated the word Jowi which means a Buffalo in the Luo language.

The ODM leader then proceeded to where Moi’s casket was lying to perform a ritual on his body.

He waved his fly whisk 6 times, then bowed amid cheers and laughter from mourners.

This was the second time he was performing a traditional ritual on the body of the fallen head of state.

On Monday, Raila went to pay his last respect at the parliament buildings where Moi’s body was lying-in-state.

Accompanied by his wife Ida, and son Raila Junior, he performed the on the body for the first time.

When the former head of state died on February 4, a section of Kenyans was anticipating the moment he will ay homage to Moi.

Many questioned whether Raila will mourn his demise since he was a victim of torture propagated during Moi’s Era.

However, Raila and his wife said that they had forgiven Moi for the pain that he had caused them during his presidential term.